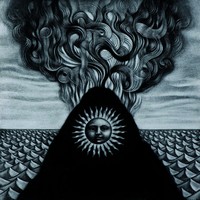 Gojira has never been one to go for the “easy album.” Take a look at their discography and you’ll find the only constant is change, as the band seldom repeats themselves. Thus, with the extended window of absence between L’Enfant Sauvage and Magma sees the band continue to evolve their sound into new ideas and concepts. But as with any metal act that seemingly pulls further towards something “accessible,” it becomes a heated debate about “selling out” and other grumblings (clean vocals, of course).

It’s been four years since L’Enfant Sauvage, and Magma does not seem like the logical successor at first listen. “The Shooting Star” starts things out in a more melancholic way that one might expect, and leans heavily on clean vocals, something that the band has used in the past, but not to the extent that they do on Magma as a whole. During the recordings, the Duplantier brothers lost their mother, so it does make sense that Magma yields more melancholy in the musical section than in previous outings. “Low Lands” and the title cut also showcase a more lumbering and methodical approach, with plenty of foreboding atmosphere to get lost in. On the other hand, “Stranded” is the most accessible number the band has performed, but it’s hard to deny the infectious nature of the song. The lyrics still retain the eco-friendly approach that has gotten them some accolades (“Silvera”) but overall, this area to is steeped in more emotionally deep waters. But the penchant for groove is still strong, with cuts like “The Cell” and “Only Pain” asserting that trademark Gojira knack for dense yet melodic guitar work. The concise nature of the album (clocking in at about 43 minutes) keeps things constantly moving – shorter songs trimming away the fat and keeping things consistently fresh.

If there are any small points of contention, it’s the two instrumental cuts, “Yellow Stone” and “Liberation.” While not bad by any means, they seem more like atmospheric add-ons to pad the runtime. That aside, Gojira’s evolution continues in a way that fans should be able to easily get behind. A true grower in all means, it may take a few listens to really capture what the band was trying to achieve with Magma, but the effort will then pay its dividends with each successive listen.