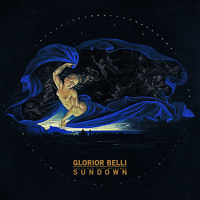 For a stretch, Italy’s Glorior Belli were poised to go where no black metal band had gone before: Southern swamps. “Southern swamps” as in the ones we have here in the US-of-A. For a group that had originally earned its marks via their scathing 2007 Manifesting the Savage Beast and even better follow-up Meet Us At the Southern Sign, their plunge into sludge-oriented BM didn’t amount to much. The Great Southern Darkness had its moments, but 2013’s oddly-titled Gators Rumble, Chaos Unfurls was a total miss. As a way of turning things around, Glorior Belli have returned to their roots with Sundown (The Flock That Welcomes).

Now that a good chunk of the Southern sludge wrinkles are out of the band’s sound, the re-emergence of on-the-attack riffs and structures is inviting. Glorior Belli goes for it right away with “Lies Strangled Skies” and the excellent “World So Spurious,” which crests with an ominous chord movement and some cool bass noodling. Main dude Billy Bayou (let’s just call him Infestvvs because it’s cooler) hasn’t totally let go of the dirty blues, as evidenced by “Rebels in Disguise,” a song that is as dirty as they come.

Elsewhere, the blistering “Satanists out of Cosmic Jail” (what is this, a Monster Magnet song title?) and “We Whose Glory Was Despised” further drive home the extremity point. Fortunately for Infestvvs, neither song feels like a nostalgic wrap-around, but rather, fertile, exciting barbs of black metal, the type that put Glorior Belli on the map in the first place.

From our point of view, the dalliance with sludge and Southern rock within the context of black metal wasn’t a bad idea to begin with. Simply put, the execution on Gators Rumble, Chaos Unfurls was off. With such ills now rectified, Glorior Belli can go back to being a black metal band who can stick out like a sore thumb.