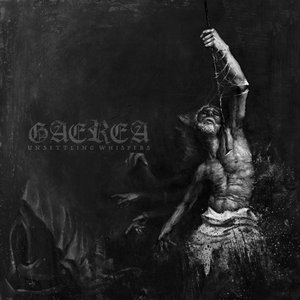 It is a failure on my part that I do not know more about Portugal beyond its once legendary status as colonial power. Throughout 2018 so far I’ve taken a few steps to rectify that failure: I began the slow process of learning written Portuguese (which, much like French, makes ample use of vowels that love to maul the native English speaking mouth), I read the outstanding work The Book of Disquiet (in English, however) by Fernand Pessoa, and I’ve crossed paths with two monstrous releases from the country. One came earlier this year, with Sinistro’s beautifully exhaustive Sangue Cássia; the other is Unsettling Whispers, Gaerea’s suffocating yet accessible take on the world of modern black metal.

Gaerea is very much a modern entity: Unsettling Whispers shares at least half of its DNA with Paracletus era Deathspell Omega, and more recently, Schammasch’s stellar Triangle (though only to a point, no clean vocals here). The other half shares as much in common with the likes of bands like Celeste or Throane, a churning, post-heavy morass that, for lack of a better term, is suffocating. Dynamics, while non-existent in mood (this album is one thing and one thing alone, and that is bleak), the songs vary in pace and tone considerably, with the blastbeats you expect giving way to the churning, melody-laden explorations you don’t. Sitting near the album’s center is like as not the embodiment of this, “Extension Into Nothingness”.

Other modern elements exist throughout as well. The sound is thick, with an even mix that neither favors nor subducts the many voices in this black mélange (with tech being what it is now, bands only seem to come into truly shitty sounds on purpose). Recorded between some fallen trees Unsettling Whispers is not. Anonymity and the nihilistic pull of the void are parallel concepts at core here: for the former in the stance taken by the personnel involved, the latter a more prevalent theme in 2018 for when facing the daily perils so many do, the conventional tropes of Evil seem painfully quaint.

At seven tracks and just under 42 minutes, there is no fat on Unsettling Whispers. Much like the faceless, pulsating darkness that inherits many corners of our world, so too does it throughout this work and for those looking for the means to cast a thick shadow over your oppressively-humid (Northern Virginia, I’m looking at you) summer days, Unsettling Whispers knows rare equal. 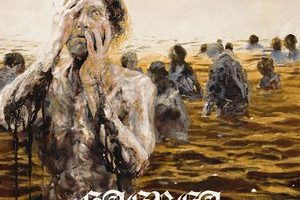