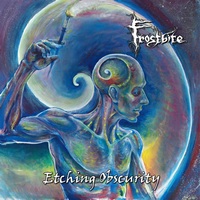 It’s January, it only seems appropriate to be listening to a band called Frostbite. Even more so considering their “progressive black n roll” description alongside a cover that has colors that for some reason seem to remind of a winter’s evening. And hey, they are from Canada so geographically speaking, they’ve got the cold thing down on that front too.

Surprisingly, the self-description of the material works pretty well. There’s progressive elements in the mix, alongside the blackened atmosphere (there’s only a little bit of blasting to be had on that front thankfully) with contrast with some occasional bits of almost uptempo melodies that never come across as cheap or feel off-kilter with the harder edge of the band. One of the strongest songs of the album, “Forgotten Path,” mixes some killer, old school Gothenburg-y riffs with more ominous and glacial progressive riffs at the onset to solid results. “The Pest” takes a darkly rockish vibe and injects some cold melodies with a (mostly) galloping pace and sells it all nicely. “Shining” does a bit further on the progressive spectrum, complete with a dynamic shift from acoustic with clean vocals to blastbeats and sheer venom without so much as a hitch.

The problem is that the production is a bit thin, and the album doesn’t quite have the bite that an album like this should. It impacts the rest of the material as it keeps Etching Obscurity from really unloading all of the intriguing melodies that it has to offer (see above for prime examples). There’s absolutely some potential lurching below the flat sound, and hopefully with the next album Frostbite can capitalize on that.