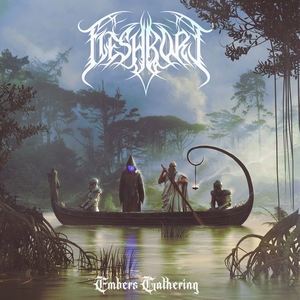 After an impressive 2017 demo and a follow up EP (Malignancy) in 2018, Fleshbore did some reconfiguring within the band, gaining new vocalist Michael O’Hara and drummer Tyler Mulkey. Releasing a single “Cynicism” (which also appears here), the band recorded their debut full-length, Embers Gathering, and signed with Innerstrength Records. A solid mix of technicality, brutality, and melody give Fleshbore just the edge they need.

In some ways more similar in tone to a band like Cognitive than say, Obscura, in terms of their technical finesse, Fleshbore keep things rather brutal while dressing things up with melody and technical riffs. It’s a great combination to stand out a bit further from the current tech-obsessed acts that end up generating sterile offerings in attempt to be the most clinical and prestine act around. Fleshbore keeps it nice and dirty, as “Careless Preacher” quickly illustrates as the band jumps straight into a speed run blasts and frenetic yet playful melodies with some devastating grooves to follow things up. This sets the pace for things to come, as the band is keen to steamroll everything in their path but still stop to smell the roses along the way. “Revivified” exemplifies this with plenty of breakneck speed runs, including some rapid fire vocals, but also with an atmospheric middle section and an attention to nuanced melodies even at its most visceral. As one of the most atmospheric cuts, “The Scourge” has a bleak and ominous tone that sees the band at their most melodic in a way that still makes it bludgeon.

An act that fans of tech and brutality can rally behind, Fleshbore leaves a strong impression. Embers Gathering can be a gut punch as well as tickle the ear with melody and musicianship. It’s a combination that should turn some heads for the act very soon.