All is well as we hit the busiest time of the metal calendar. Lots of metal thriving on Bandcamp (as per the usual). With colder weather approaching, it’s time to start gathering up some metal to last the extended time inside. This month we feature Blame Zeus, The Design Abstract, Dyed in Grey, Fleshbore, Hatchling, Haze of Summer, Manora, Sacred Son, Screams of Winter, State of Creation.

Portugal’s Blame Zeus bring with them a wide variety of resources. Citing influences as diverse as Alice in Chains, Clutch, and Ghost, they are never at a loss for ideas. Some cuts like “The Devil” feel like grunge meshed with stoner doom, while “Id” takes some blues influences into a rocking vibe. Straight-forward and heavy riffing songs like “All Inside Your Head” are countered by softer moments in “More or Less” and “Signs.” No matter the approach, they pen some enjoyable tunes that are centered by Sandra Oliveira’s strong yet emotive vocals. Worth a look if you are seeking something that isn’t afraid to rock ‘n roll.

Taking a bombastic and epic approach to cinematic material, The Design Abstract sounds more akin to a metalized soundtrack than anything else. Some passing similarities to that of Mechina, as some more sci-fi feelings come about from time to time, and the band straddles the line of progressive, symphonic, and metalcore with their musical instrumentation. Harsh rasps and heavy riffs have a modern spin behind them, which blends well with the orchestration, where even industrial effects leave their mark. Clean female vocals also have their place in the sound, and provides some added beauty to the mix (think Season of Ghosts). The scope of each track is what impresses the most – they can hit playful moments like “Exposition” and still leverage sprawling heaviness with “The Event Horizon.” Lots of potential here.

No strangers to DR, Dyed in Grey have been releasing material here and there over the past few years. They’ve also altered their formula significantly since the beginnings. But it’s always been a natural shift from release to release. “TARS” saw a shift towards more progressive material, and “A New Obsession” takes things a step further. They’ve also gone ahead with no vocalist, which does give some of the progressive noodling more of a center position. It’s a catchy little piece overall, highlighted by intricate and melodic moments of melody. It’s the first cut from an upcoming album, so keep your eyes open for that if you dig the song.

It’s often noted that a demo has to be pretty strong for coverage here, and Fleshbore nails it on this debut. It’s a modern approach to death metal that brings in quite a few different feelings as you move through the four songs. Moments of melody, technical playing, and straight-ahead bulldozing aggression all merge as the band impressively delivers 6-8 minute cuts that never falter or teeter on boredom. Instead, songs zip around cohesively in an attempt to stay fresh. Highlight “Cold” introduces more melodic riffing to start (think more Hypocrisy than melodeath) and cranks up the brutality over the song with some hard-hitting mid-tempo grooves. A band to get into now before their inevitable rise to power.

More Indiana death metal this month, this time featuring 2 members (Derek Steele and Ian Inman) who you may have seen on this site through their other band Chiasma. The latest track from Hatchling hits as hard as anything you’d expect from the brutal death spectrum, with guttural lows, frantic blastbeats, and zippy/intricate riffing patterns. But some eerie atmospheres and keys are included to give it even further appeal (an almost Castlevania vibe at one point). A completely addictive track that rages with heaviness but offers plenty of twists and turns. Hopefully the album will follow suite in the near future.

It takes some guts to actively label your band as ‘hipster black metal,’ but it does give you a good idea of what to expect with Znoi. Expect some out of the box stuff here, as the more ‘flowery’ post-black material clashes with interesting folk arrangements and melodies as well as bouncy electronic elements. It may take some people aback with its eccentric influences, but there’s also something beautiful about it. Take the melancholic vibe of “June,” where gloomy riffs sit next to bombastic electronics (that might not sound out of place on an Amaranthe album) – somehow it just works. Purists are undoubtedly grabbing their pitchforks over it, but it’s an addictive listen if you can wrap your head around everything the band puts into their music.

Sometimes melodic metal bands have a tendency to rely too heavily on the singer to deliver all the goods and end up taking a backseat to the action. Manora does not utilize this crutch. While Mirte van der Ham can certainly hold her own and has some fantastic moments in the album – it’s a band effort in the end. A firm metallic base is applied, with some heavier moments than you might expect (“A Time in Change”). Hard-hitting drumwork and headbangable riffs attach to van der Ham’s vocals and catchy synth work, ensuring you’ll remember the music just as much as the choruses. A great introduction to this band, which we’ll hopefully hear more from soon.

Lots of commotion lately with this album in the underground, mostly due to the rather cheery cover photo of Dane Cross (who handles all duties on the album). Perhaps it’s how joyous it feels in juxtaposition to the rather cold and bleak sounding black metal material that comprises the music itself. Sticking to the music itself, it hits just the right, raw atmosphere for something like this – not afraid to fire up the blast beats and grim croaks, the swirling blackened melodies also find a way of coming out as well. The only break from the madness comes from the interlude “Ethereal Light,” which certainly fits the name. Forget the silly cover controversy, this is well done black metal.

Chicago’s Screams of Winter manage to pull off the best of both worlds on Divine Chaos. There’s a dedication to some thrashy, galloping riffing laced with catchy melodies (and guitar heroics) as you’d expect from more old school melodic death metal (as is the aggression levels). But they also combine some more modern components such as upbeat keys (see “Orwellian Overture”), some chuggy riffs, and clean singing (“Divine Tragedy”) in a way that enhances the vibe of each song. So in the end you have an album that can groove as well as melodically soar. A killer combination.

Catchy, instrumental metal from Countless Skies’ guitarist James Pratt. It’s a bit more modern in tone than the melodeath act in which he plays, but it’s no less melodic. Short, 2-3 minute tracks are easily digestible, convey their points, and never veer into the self-indulgent. Some highlights include the lively “A Ship in Harbour,” groovy “Ripples,” and fun melodic antics of “Seraphim.” Truthfully, each of the tracks has a rather playful vibe that just seems to lack in instrumental albums such as this, and really helps to entice you in. It feels peaceful at times (the synths in songs like “The Supercilious Sacrifice” aid in this), but it’ll keep your toes tapping. 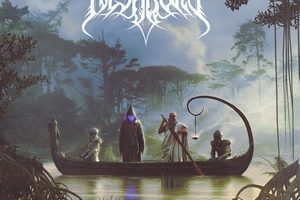