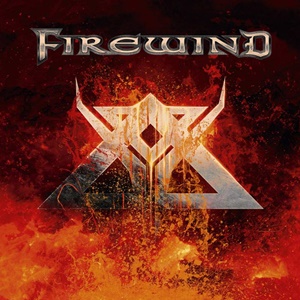 Guitarist Gus G has quite a healthy resume in the metal field: Dream Evil, Mystic Prophecy, Nightrage, and Ozzy Osbourne records and tours amongst his many decades of work. Probably his most prolific and well-respected effort comes from his own solo albums as well as Firewind – this self-titled effort from the latter his ninth under that band moniker. Having to switch vocalists again in the eleventh hour before deadlines crept in, Gus reached out to Herbie Langhans, ex-Sinbreed singer who is now a part of the Avantasia live lineup and also involved with numerous other heavy/power metal recordings. In the end, these eleven songs encapsulate a dynamic array of Gus’ skills as a songwriter, reaching back a bit into the past while keeping his sights on solid heavy/power metal mechanics with neoclassical and guitar hero nuances that have made him successful globally.

What the listeners can expect is a mix of solid metal anthems, speedier power outings, and the occasional left field turn to prove that Gus is willing to stretch when necessary. Herbie’s grittier range allows the songwriting to go into sometimes older, Between Heaven and Hell or Burning Earth terrain – check into “Break Away” or “Perfect Strangers” for those heavier textures that blend perfectly with that bluesy meets finesse delivery. Those who love the heads down speedier, neoclassical-oriented riffs, hooks, double kick action and soaring melodies should savor “Devour” and closer “Kill the Pain”, while more of the mid-tempo gallop that reaches back into early Europe or Gary Moore for reference points comes in the solid “Orbitual Sunrise” – part one of a three part astronaut in space sci-fi theme explored of the course of the album (“Longing to Know You” and “Space Cowboy” rounding out the trio of tracks). Gus as a guitarist and composer understands serving the needs of the individual songs first – yes, there are plenty of dazzling tricks and licks, but he knows how to keep the focus on great verse/chorus foundations and allow the vocals and solid rhythm section execution to carry things home. “Overdrive” is one of those outside the box efforts for Firewind, a tale professing the love of the genre with a slower, “Heaven and Hell”/”Headless Cross”-like main musical atmosphere that could be an anthem that is a mainstay live for the band.

Firewind doesn’t need to reinvent the wheel with their power/heavy metal style at this point. They just continue to deliver impressive songs and performances, keeping listener engagement on high and hopefully will continue onward with this lineup as the future possibilities and output should be impressive.