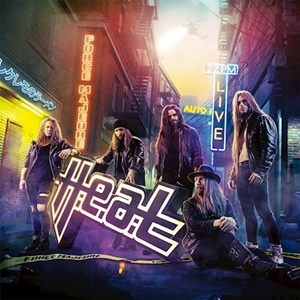 While other parts of the world slowly lost interest in catchy, melodic heavy metal that intertwines 80’s influences from the AOR/Sunset Strip world, Scandinavian territories grabbed the mantle to produce some killer new artists. One of the pioneers of that resurrection is Swedish act H.E.A.T. – forming in 2007, releasing two albums with original singer Kenny Leckremo before he left the band. Recruiting Erik Grönwall as his replacement, they garnered more success during the last decade – enough so that he is now the new vocalist for Skid Row. Reenter Kenny to the fold, which puts us at this seventh studio record Force Majeure, an eleven-track outing that represents all the best sides of infectious songwriting, energetic and uplifting performances, plus that extra drive and attitude needed to win over cynics, critics, and all in between.

The building blocks of the H.E.A.T. sound are the undeniable multi-part vocal harmonization spots during key verse/chorus sections, the killer musical foundation of guitarist Dave Dalone and keyboardist Jona Tee, plus the potent, soulful and upper range confidence from Kenny’s voice. The weapons at play allow the band to go from the faster, highway ready “Nationwide” to the playful, mid-tempo “Hollywood” or a groovy, blues-infused number for “Hold Your Fire” and work all within the dimensions of their style. Triumphant keyboard/drum march strains start off “Paramount” on another delightful note – drummer Don Crash aligning with solid pocket skills, accenting his hi-hat/snare proficiency to great effect for the verses. And for those that love when H.E.A.T. rears back and fires power metal riffs into the mix, “Demon Eyes” can tear the roof off the building in that regard – a slice of Edguy meets Firewind to these ears. Favorites change through each successive airing – it’s hard to deny the guitar/keyboard fusion and separate spotlight nature that moves opener “Back to the Rhythm”, beyond “Nationwide”, and the powerful, properly positioned ballad “One of Us”.

H.E.A.T. will not lose any momentum based on this high caliber record for Force Majeure. Continually playing to their strengths as musicians who know their craft, this is outstanding proof that there’s a market, a desire, for strong melodic hard rock/heavy metal that has bite, excellent hooks, and versatility to keep listeners anticipating more.