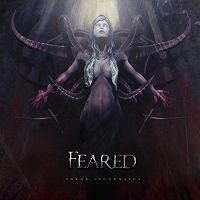 Recently plucked from relative obscurity to man the lead guitar spot in Six Feet Under, Swedish guitarist Ola Englund has made a name for himself in the gear community thanks to his YouTube channel, and to a lesser degree, his main band Feared. While Dead Rhetoric has yet to visit the man’s channel (a gear nerd we are not), Feared provides a welcome groove-laden respite from the current death and thrash uh, current, in the underground. Therefore, the band’s fourth effort, Furor Incarnatus presents a modern touch to an otherwise stale fraction.

According to the band’s bio, drum nomad Kevin Talley laid down the skins on Furor Incarnatus. Whomever is tasked of keeping track of Talley’s discography is a brave soul, but the drummer’s imprint is all over the album’s 12 cuts. Talley lends some quality syncopated rhythms to Englund’s otherwise simplistic riffing, and it makes for some head-bobbing moments on “Breathing Failure” and “Devil in White.” Mario Ramos’s vocals occasionally fall into mindless tough guy territory, so he proves to be the only take-it or leave-it aspect of the album. The rest is on par with modern metal’s top groove mongers ala Fear Factory and one of Talley’s 85 former bands, Chimaira.

Sure to get some extra attention based off of Englund’s association with Chris Barnes’s much-derided SFU, Feared could be a back-door entry into the Scandinavian modern metal fray. And yeah, we’d rather get down with a groove from Feared than a gargled passage from Barnes any day of the week.