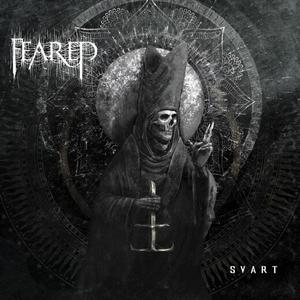 Sweden’s Feared are nothing if not consistent. Keeping up with the tradition, the band has saw fit to release an album almost every year of their existence (going as far as releasing two back in 2013). Svart makes for the eighth full-length release in the band’s catalog. Even if there’s only 25-minutes worth of material this time around, it’s bound to satiate fans until they inevitably come up with something for 2018.

Clearly, Feared aren’t really going to mess with the formula too much. Their groove-friendly death metal still is the sort that can be championed with strong cuts such as “Your Black is My White” and “King of the Dead” providing quality riffage that one has come to expect from Ola Englund. Catchy and aggressive riffs dominate the landscape on these types of tracks, along with some pleasant leads chiming in as needed. “Hate Mantra” seems to take the title for most massive riff, which some chunky/thrashy melodies that seem guaranteed to get your body moving. The band hasn’t lost the more atmospheric part of their sound that has been shifting over the years, with “My Next” being the strongest example of it here, with a more melodic edge and some clean vocals providing a change-up from the tracks preceding it. If there is one minor complaint, it’s that out of nine tracks, three of them are short instrumental pieces, which add up to about 5-minutes of a total of 25. While there’s nothing wrong with them on their own, the small amount of content makes one wish for a few more minutes of bruising instead of more mood-setting material.

Even if it feels more like an EP than a full-fledged effort, no one is going to complain about getting more new Feared material. They continue to provide just the right amount of melody to balance with their groovier side.