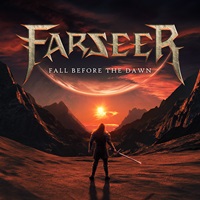 Another Bandcamp discovery, Farseer has been slugging their way through the Scottish metal scene – recording a single and a couple of EP’s during 2009-12, also opening for prime power/melodic acts like Sabaton, Firewind, and Freedom Call. Four years later, Fall Before the Dawn hits the streets as the quintet’s debut full-length, hopeful to assert themselves into a stronger entity within the melodic power metal realm.

It’s always interesting to hear European bands incorporate a wide array of influences from their own shores as well as North America – and Farseer embrace more of an aggressive guitar tone while still being very hooky/catchy in terms of the riffs and song construction. During a longer song like “Second Strike”, the prolonged instrumental elements give bassist Stu Clark and guitarists David Connolly plus Jon Stewart a chance to flex technical fluidity while furthering the melodic elements in a Judas Priest meets Symphony X manner. Establishing a hook driven sound with NWOBHM/Teutonic charges, “Luck of the Joker” benefits from a sing-a-long oriented guitar sequences that weaves in and out amidst the heads down mid-tempo parts, an early indicator of Farseer’s strength as composers and players. They take on the heavier aspects of Gamma Ray, Helloween, and Blind Guardian in these 12 tracks – without succumbing to any particular ‘happy/cheesy’ façade, as cultural spots come naturally out of the faster speed riffing during “Chthonic Visions”, drummer Craig Rooney shifting between relentless double bass and controlled mid-tempo grooves seamlessly.

Early in the band’s career, former bassist David Bisset made the move to vocals for a few live shows, before permanently taking over at the microphone – and his distinctive, soaring register can shatter glass or make heads turn in awe. James Rivera, Rob Halford, and even Daniel Heiman of the much missed Lost Horizon came up in many spots in terms of ease of register lifts or sustaining trailing notes for the verse/ chorus atmosphere shifts within “Way of the World” or the pounding anthem “Nightmares Collide”. He’s a keeper for sure, one in a thousand for this type of melodic power metal. Quite a surprise to the good, Farseer execute high quality melodic metal with power and grace, and Fall Before the Dawn should gain appeal from those seeking well-constructed songs from classic influences yet taking full advantage of modern production values.