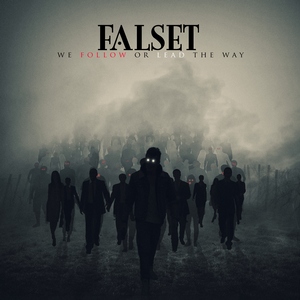 Certainly, having drummer Chance LaBrie (son of Dream Theater vocalist James Labrie) is going to help potentially turn a few heads your way with the legacy factor. But if it’s all for not, that just means that there’s a lot of head turning and immediately walking back out the door. Falset’s debut manages to get folks turning heads, and it’s also likely that it’s going to be that push that gets people to stick around if they enjoy a nice variety of modern metal splendor and spectacle.

We Follow or Lead the Way checks off a bunch of different boxes without having to feel like it’s just trying appealing to a wide spread of folks. There’s everything from metalcore to djent to progressive and modern metal, with a healthy dose of hard rock to take in, but it’s pretty consistent in quality for the varied tracks. There’s a few tracks that don’t shy away from some heavy moments, such as Without a Trace” and “Hollow Saints,” that carry a snarling metalcore spirit with clean/harsh vocals and some groovy djent riffing. But if you dig deeper, you can hear some pretty playful melodies that guide the tracks and give them a longer lasting appeal. Even the more melodic cuts of the bunch, such as the pop/rock-driven “9 Minute Drive” and already released single “Give,” work because they bring in some heaviness at the right moments to enrich the experience. When laced with some tasteful electronics, as well as some strong and soaring vocals (see “Kingdom”), it manages to grab that initial hook that will pull you back in. But you’ll see that on repeat listens some of the instrumentation pops just a little more – further enticing you inwards.

Those looking for some modern metal that doesn’t shy away from big hooks while still delivering some djent/prog vibes to discover are going to dig what Falset is doing. It’s a fun first full-length that has a little more under the surface than you might initially expect it to have.