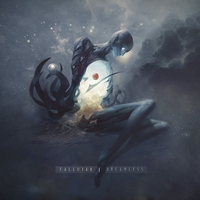 One of the most talked about bands of the last few years, Fallujah made waves when they released the 2014 monster The Flesh Prevails. It wasn’t that they were the first band to infuse atmosphere into a death metal structure to generate emotion and feelings, it’s that the way that did it was so fresh and intriguing. Riding the deserved hype train all the way to a signing with Nuclear Blast, the band has (somewhat) quickly returned with their follow-up, Dreamless.

“The Void Alone” brings us to the other dimension Fallujah has fidgeted with – female vocals. Taking the slightly more abrasive touch of the new material and contrasting it with ethereal melodies (and equally ethereal female vocals) creates a dynamic that is simply intoxicating. The floaty title track uses these vocals wisely as well, adding a sense of grace to the music. The 55-minute runtime allows the music to really breathe and flow freely from blistering heaviness to sweeping melody in a natural flow. Fallujah truly understands how to blend together feelings and let them resonate over a transition. Check out the movements between the more traditional death metal feel of “Lacuna” and how it shifts into an atmospheric center with female vocals and finishing off the album with a melodic lead over a more frenetic feel.