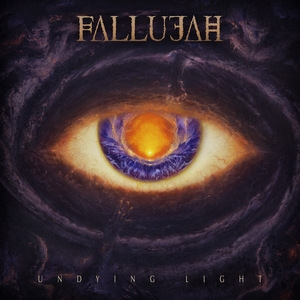 With three superb releases that rightly got Fallujah plenty of credit for bringing a more emotional and atmospheric approach to death metal, the band’s fourth album was bound to be one of the most anticipated extreme metal releases of 2019. With some member changes since the release of Dreamless (most notably vocalist Alex Hofmann), it’s also clear that there are going to be some changes with the sound and vibe that the band has become well-known for. Undying Light continues to evolve Fallujah’s music in some expected, and unexpected ways.

Perhaps the most noticeable difference in Fallujah’s arsenal is that of vocals. With Hofmann out, Antonio Palermo (of Underling) takes the reins and gives the music a fresh take. He has his own style, and yes, there are no real brutal bellows for contrast’s sake like in previous material. But, Palermo’s diverse offerings from shouts and screams to even some cleaner vocals gives the music more to work with. It may be an adjustment for some, but the vocals have a higher degree of emotional resonance than they have had before, and they do really pull the listener more deeply into the music. The way that the music and vocals work together on the moody “Distant and Cold” is just one example of how suiting this combination can be.

The floaty, dream-like atmosphere that the band has evolved into continues to their major selling point. On Undying Light, the band has moving even further down the rabbit hole and this leaves some of the more straight-forward aggression in the rearview. Sure, blastbeats and driving moments of technical riffing still have their mainstay (check out some sections of “Glass House” and “Sanctuary”) but the percentage of this type of material versus the more somber and reflective moments has certainly shifted. It’s still intense at times, but there’s more emotional intensity to sit alongside the visceral gut-punches. There’s no interludes or guest vocalists this time around, nor as much reliance on synths either, bringing the gloomy guitarwork and atmosphere to sit in its rightful place in the forefront in tracks like “Eyes Like the Sun” and “Dopamine.”

For a band that has always excelled in creating album flow, Undying Light really nails it here. While individual tracks can shine, it feels like a piece that should be experienced start to finish in order to really take in the full perspective. While there are some tonal shifts from the last few albums, they’ve succeeded in taking their music to the next step (instead of revisiting the past) while keeping that sense of awe to their music. The floaty atmosphere feels even more transcendent and sucks you in, providing an experience that is on par with anything else the band has done to date. Fallujah continues to be a leader and trend-setter when it comes to the more emotive side of extreme metal, and Undying Light is a poignant example of how the genre can continue to surprise and delight.