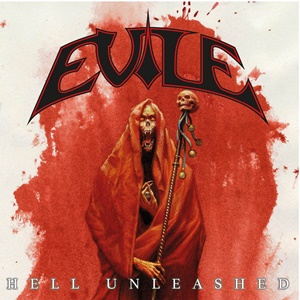 Revitalizing the thrash scene in the UK, Evile established a chunky, rhythmic sound filled with power and precision on their four previous albums for Earache. Following the contract’s completion, they lost guitarist Ol Drake in 2013, only to return in 2018. Subsequently brother Matt would leave last year – enter guitarist Adam Smith and Ol taking on vocals beyond his lead/rhythm work. Napalm Records signed the group and here we are encapsulating the eight-year break between Skull and this latest outing Hell Unleashed.

Precise speed picking of the heads down variety along with relentless tempos and beefy bass exploits allow this material to crush all who dare oppose to the Evile ways. Ol freely admits affinity for the catalogs of Metallica and Annihilator – easily viable during the main chord progressions and impressive mid-tempo progressive transitions/lead breaks present on “Paralysed” and “Disorder”. Circling outside the box for the Mortician cover of “Zombie Apocalypse” – the doom meets frantic death gear shifts provide that left field dynamic that proves the band enjoys turning their listeners on to more underground music. The smaller nuances of melodic acoustic guitar instrumentation on top of killer electric passages allow “Incarcerated” to be another standout – the six-minute plus arrangement containing a lurching riff base that launches into more Slayer meets Annihilator-oriented madness, before the mid-tempo shifting motions align with classic early 90’s Sepultura ethics. Vocally Ol has taken over from his brother Matt’s work with a bellow that fits the thrash charge – more than capable to appease even skeptics once they take in “Gore” or the closing shapeshifting title cut. Another Michael Whelan piece adorns the album cover – and you even get comedian Brian Posehn to make a guest appearance vocally for “Gore” that differs from your typical ‘musician’ spot.

Evile understands what they are great at and maximizes the musicianship crunch and battering ram approach through Hell Unleashed. Continuing to be one of the best thrash bands of the 2000’s-era and beyond, hopefully they can regain some ground considering the long layoff.