For all of the side-roads and divergence in metal today, sometimes it’s nice to hear some well-executed, war-mongering, take-no-prisoners death metal.  A fine purveyor of this particular brand of no-frills material, Eskhaton have returned with their sophomore effort, Worship Death to fill that void in your life.

Full of chaos, destruction, and filth, Eskhaton serve no higher purpose than that of audile devastation.  Grimy, dirty guitar riffs burying the listener whilst ominous growls take you on a journey through 45-minutes of oppressive death.  Militant drumming rounds things out, giving the feeling of a war machine out to flatten everything in it’s past.  The relentless bludgeoning recalls bands like Krisiun or a death metal Marduk.  When things occasionally take a turn in the slower direction, a more Incantation-esque vibe can be detected.

Though admittedly a bit one-dimensional, a key factor in Worship Death’s appeal is that of atmosphere.  Much like the recent release from Corpsessed, Eskhaton capture a bleak, rotting atmosphere that’s hard not to get absorbed in.  There are in fact many stylish solos throughout the murky riffs (“Dark Era”), but it’s easy to become intoxicated in the album’s merciless frenetic rush.  That’s not to say that some songs like “Skeleton Shrine” don’t have their moments of massive riffage, just know that these moments are few and far between.

As an adventurer of all things death metal, you’d be hard pressed to find a better outlet for a pure adrenaline rush than Worship Death.   Bestial death metal at its finest, do not expect to be able to catch your breath here until “Outro” hits its last note of eerie wind-blowing. 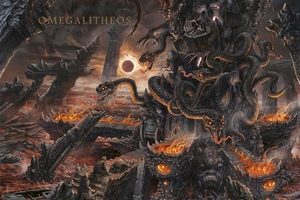