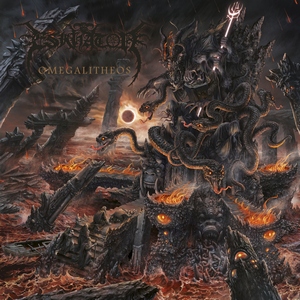 It’s been well-established that Eskhaton plays bestial and blitzkrieg level death/black metal. The type that goes for the jugular and never lets go. Unrelenting and brutal, as well as any other superlative one could muster. But at what point does uncompromising begin to cross the line into the point of redundancy? That’s the most important question that their third full-length, Omegalitheos faces.

2014’s Worship Death worked, mostly because the line never had to be crossed (even if it did end up coming close). But with Omegalitheos, weighing in at a staggering 54-minutes in length, it really reaches a point where you begin to feel as if things are on repeat. Granted, there are some nice, Incantation-esque slowdown moments (“Nusku Etu Genii”) but all-in-all, the lengthy trek begins to repeat itself. It’s a relentless blastbeat fest for the overwhelming majority of the album, complete with wildly chaotic riffing and demonic vocals. A formula that yes, works wonders for the first few tracks. The jackhammering approach is downright brutal, and Eskhaton have a very firm grasp on how to attack it with the best of intentions. It’s a pure, primitive feast of brutality. You can even focus in and hear some of the technicality/intricacy of the music itself. But said brutality diminishes as the time frame you listen continues onward.

In reality, Eskhaton have simply continued the formula that they’ve been working with. It’s savage and uncompromised, harkening back to when death metal was raw and primal. Those who have enjoyed the trajectory previously will no doubt get their fill here, but anyone outside that circle aren’t going to find much of interest. A shame, because in smaller doses it could be a real ripper.