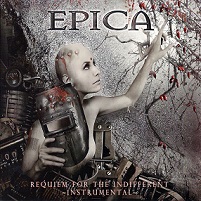 and more streamlined, heavier material on this fifth studio record Requiem for the Indifferent. Reaching headline status in North America following 2009’sDesign Your Universe, many are curious to see if Epica can reach Nightwish sale proportions as vocalist Simone Simons guest work for Kamelot and Primal Fear improves the profile for her main act.

It’s a given that growling vocalist/guitarist Mark Jensen as a composer leaves no sonic stone unturned, using the talent of his fellow bandmates to squeeze out every bombastic element possible on moving tracks like “Internal Warfare” or the classical choral parts for “Monopoly On Truth,” the latter featuring some innovative blast beat-meets-power metal drumming from Arien van Weesenbeek. Simons’s heartfelt delivery shines on the tranquil ballad “Delirium” which opens with a church-like atmosphere and moves quickly into keyboardist Coen Janssen’s stirring piano skills – an obvious future set highlight for the band.

The second half of the album wavers in terms of impact- once again evoking a strong case for Epica to seriously consider cutting back a couple of songs per record to not overstay their listening welcome. The doomier “Guilty Demeanor” with its Solitude Aeturnus-meets-Therion atmosphere is a surprisingly refreshing 3:22, with the thicker electric triplets sure to please the heavier Epica contingency. One too many ballads like “Deep Water Horizon” make this album an arduous task to handle all 72-minutes each and every playback.

Epica’s expansive style allows for plenty of experimentation, which can only benefit the group in the long run in terms of taking their audiences to exotic locations. The straightforward “Storm the Sorrow” and the almost 10-minute closer “Serenade of Self-Destruction” showcase both aspects of Epica that keeps the faithful returning for more- the yin and yang of gothic simplicity, powerful charge and symphonic glories.

The natural slow progression for the band continues, and I don’t foresee Epica losing many followers with Requiem for the Indifferent.