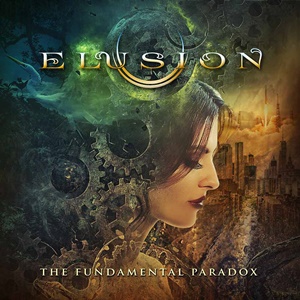 This Belgian act arose from the mind of veteran musician Domingo Smets, a guitarist/vocalist with decades of experience in acts like Agathocles and Ancient Rites. Teaming up with vocalist Evy Verbruggen and drummer Frederik Van Mieghem, Elusion began in 2015, releasing their debut EP Desert of Enticement the following year, signing with Art Gates Records who put out their follow-up album Singularity during 2019. As to be expected the global pandemic saw a brief output lapse, the band choosing to lay low and finally return with a self-released second album for The Fundamental Paradox.

A diverse musical palate takes place throughout these nine songs. While the main style contains gothic/symphonic metal parts at heart, these musicians also expand into extreme, progressive, and modern textures depending on the atmosphere, tempo, or feel they wish to achieve. Often the vocals will go from a clean, graceful melody that’s easy to sing along to into this darker scream/growl contrast that sends chills through the air. Domingo isn’t afraid to take his tone, approach, or skill sets into crunchy, down-tuned terrain – check out his sophisticated rhythms beyond the circular guitar melodies that mesh seamlessly for “Chiaroscuro” (the airy background choirs enhancing the dramatic flair throughout). Another track like “Adversity” throws a veritable roller coaster of parts at the listener: acoustic guitars/piano giving chase to driving electric guitars/double kick movements, beauty against the beast verses into a narrative-led conclusion. Commercial orchestration/hooks appear on “Science – Fiction”, Evy confident in gliding up and down her impressive main melodic register, a song that followers into After Forever or Epica will find favor with. The progressive angle comes out on closer “Deafening Silence”, as layers of stunted guitars and mesmerizing drum movements volley against the exotic-oriented melodies, the lower choir chants providing that ominous ambience that builds into a distant ending.

The lion’s share of appeal to Elusion lies in their ability to not allow the keyboard/orchestration aspects to wash out the natural guitars, bass, drums and vocals within the band, making the performances as well as the songwriting the determining factors for active listener retention or appreciation. As such, The Fundamental Paradox could be one of those bridge gap albums for those who want a little more bite/aggression at times in their preferred gothic, symphonic metal lane.