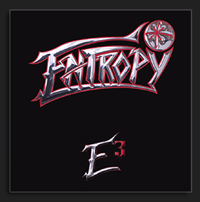 Growing up Canadian and listening to thrash metal in the 80’s afforded me some truly blissful listening experiences. Bands like Sacrifice, Overthrow and Entropy were all home-grown talents that literally tore my ears off. Unfortunately, many bands of their ilk petered out with the advent of grunge dominating the airwaves in the early 90’s. All of a sudden being a devoted thrash fan was a total downer after the scene came so close to extinction.

Most of these bands seemed lost forever, lying dormant in the icy grips of obscurity, until a new wave of thrash bands took up the cause anew. Suddenly, thrash metal was relevant again and this gave bands like Sacrifice and Entropy a second chance at life. First we were treated to Sacrifice’s stellar comeback album The Ones I Condemn in 2009 and now Entropy answers the bell with an equally defiant release entitled E3 here in 2012.

This new full length (their third) is a pure face-ripper, and it charges forth like a possessed beast armed to the teeth with malevolent riffs. Leading the charge is singer Ger Schrienert, whose trademark screams remain bristling with the old-school thrash edict. His vocal range always teetered between terse shouting and was layered over with his trademark high-pitched wail. Just check out the song “Bloodrites” as a perfect example of how original his vocals sounded and still remain vital as ever. Schrienert vocals are simply stellar throughout this release.

The other constant factor on E3 is the crushing guitar tones of Dan Lauzon and George Giourgis. The guitarists are a perfect tandem, eliciting a cacophony of sounds to get you fist pumping at every turn. At times you will hear a mixture of thrash, death and groove merging into this explosive mélange of neck snapping brutality. This punishing tone is evident on songs “Means to the End” and “Succubus,” and in my mind the closing song “Darkness Eclipsed” showcases a haunting acoustic beginning, before giving way to the raw power of these two guitar greats.

Call this a comeback album of sorts, but in many ways it’s like the band never left. All seven tracks on this release are certifiable thrash metal songs of high quality, and they continue to forge a unique and frenzied approach as originators of this genre. E3 is a remarkable achievement for a band away for so long from the scene it helped to spawn.