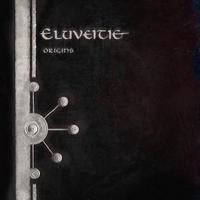 Easily one of the biggest names within the folk metal scene, it was in fact Eluveitie that got this writer more into more folk metal all the way back with Spirit. Needless to say, time gets set aside each time the band releases a new album to soak it in for a bit. One sentence review is as follows: if you are familiar with Eluveitie, Origins will certainly please you.

Eluveitie has reached the point in their career where they have set up the template for what is to be expected with each album and there are no real major deviations from that formula. By no means is that a bad thing, as Eluveitie are one of the strongest in their field, with nice mash up of traditional folk instrumentation but never forgetting the more melodic death inspired riffing that centers around it. Truthfully, Origins is host to some of the band’s greatest songs to date. “Celtos” comes across as the early favorite, with more of a folk direction with bouncy melodies and the best chorus you’ll come across here. The two “Anna” songs, which have become more of a tradition on the last few albums are top notch, with “Vianna” and particularly “The Call of the Mountains” again pulling more of the folk out of the band and provides a refresher from the more metal oriented tracks. Speaking of the heavier tracks, “Sucellos” and “The Silver Sister” should be welcome sights in the band’s live set, providing the necessary adrenaline rush while making sure the folk instruments get their share of the limelight.

The only thing that makes Origins lose a bit of its luster is Eluveitie’s penchant for voice-over narrations. There are four tracks this time around that use these to add to their “story.” While they are usually short, they do detract from the overall flow of the album, even if they do include some usually lush instrumentation behind them. With sixteen tracks total, it seems a bit much.

Barring the narration (which some people probably enjoy), Origins is another success for one of the folk metal’s greatest bands. There are few that can match Eluveitie’s grace with heavy riffs and gorgeous folk when they are on top of their game. They are clearly firing on all cylinders with Origins.