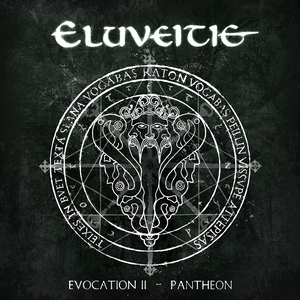 Lots of shake-ups in the Eluveitie camp since 2014’s Origins – the loss of three members (Anna Murphy, Merlin Sutter, and Ivo Henzi, who went on to form Cellar Darling) and the bringing in of five new members (!) is a lot to absorb. So in one way it’s fitting that the band has finally returned to their all-acoustic Evocation series (I: The Arcane Dominion came out back in 2009 with the promise of a sequel always floating about). It’s a good way to introduce all of the new players in a familiar format.

As mentioned, those looking for metallic crunch and riffage will find none of it here. Evocation is all about the Celtic mood and use of native instruments, together with acoustic guitars. It’s a nice change of pace from a more riff-heavy onslaught, and does allow the new members to show what they can bring to the table in a relaxed setting. Of the new players, clean vocalist/harp/mandola specialist Fabienne Erni is the one displayed most prominently as Chrigel’s barks aren’t really suited for this type of material. Long-time fans can rest assured that she holds much potential for the band moving forward. She shines in tracks like “Epona” and “Ogmios,” where her soft yet enigmatic voice is given some prominence. She moves the standout track “Lvgvs” into a whole new level, with a powerful and hypnotic performance on the chorus, which is all but guaranteed to stay in your head for a few hours after one listen. Elsewhere, instrumental jaunts like “Nantosvelta,” “Aventia,” and “Antvmnos” take advantage of the variety of traditional sounds the band can pull from and give an enjoyable Celtic flavor that has always helped to keep Eluveitie as one of folk metal’s greatest acts.

Given that it’s been three years since Origins, some Eluveitie fans are no doubt chomping at the bit for new material. Some have been waiting for Evocation II for quite some time, and it holds up just as well as its predecessor. The acoustic side may not be for all, but given the influx of new members, it does bode well for the band moving forward, whenever they choose to unleash their more metallic side once more.