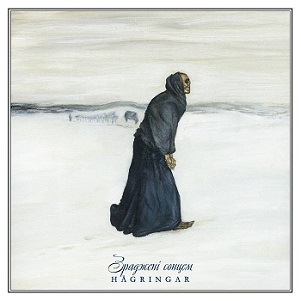 The third split in two years from the mighty Drudkh, Betrayed By the Sun finds the Ukrainian black metal kings teaming up with one-man Swedish act Grift. In contrast to their recent split with Hades Almighty, Drudkh have a found a pairing more in line with their sweeping, sub-obscuring sound, as Grift have gradually made headway in BM circles with its depressive, singular approach. So naturally this split is a go all the way through.

Two jams for each band, with Drudkh leading off the track listing with “His Twenty-Fourth Spring.” Of instant note is the improvement in the production department. While previous exercises from Drudkh relied on a warm, but conventional black metal production job, the songs found here are much larger-sounding, which in turn, makes Drudkh sound even better. Naturally, the flow-y, breathtaking reaches of the band’s riff structures take hold on “His Twenty-Fourth Spring” and “Autumn in Sepia,” resulting in a nine-minute jaunt of BM excellence. Grift take on the other end with gusto, as main dude Erik Gärdefors plants his feet in the fuzzy, traditional timbre of Scandinavian black metal. Of particular note is “Cirkeln,” where Gärdefors’s riff sensibilities take a headlong trudge through the perilous plumes of winter.

Zero novelty aspect here; just another top-rung split from one of Eastern Europe’s best, and, a band who is steadily climbing the Scandinavian black metal ladder. Drudkh and Grift are near-perfect complements to one another. Who knew black metal could be so amiable?