For the last decade, it seems that on every third new Drudkh album, the band manages to find the net and score a goal. Not that the attempts weren’t there on those in-between outings from years 2007, 2010 and 2012, but a look at your peers’ opinions on these albums will prove there’s fairly wide derision and overall negative sentiment, especially on the last two (I personally found Estrangement to be a weaker affair than The Eternal Turn of the Wheel, despite the latter’s overwhelming un-inspiration).

Last year’s great split EP with Winterfylleth has proved to be a clear indication that the band had not lost their touch. A Furrow Cut Short delivers seven new songs, clocking in just under an hour, filled with textured epic melodies, dark atmospheres, and furious mid-tempo black metal laid out in proper Drudkh fashion (captivating folk-inspired melodies of anthemic, battle-ready heft, impassioned and embittered vocal rage, and deft musicianship). “Cursed Sons I” leads off, and it’s easily one of the best songs on the album, featuring perhaps the most memorable riff on it. A great opener, and while it can be argued that the band has placed the best song at the front (so, what’s left to enjoy?) the ensuing tracks are of comparable quality, enough so that if the first track gets your attention (check out the link to the track below), then be sure stay tuned for the rest.

In terms of where AFCS sits in the band’s catalog, which is now their tenth studio album, it takes it’s place alongside 2005’s The Swan Road and 2009’s Microcosmos in terms of quality releases. The band’s best albums, 2004’s Autumn Aurora and 2006’s Blood In Our Wells still remain unchallenged, but the initial impression is that AFCS drops into the tier-II category, straight away, which is meant to be much more a compliment than a criticism, given the band’s impressive longevity, workmanship and quality.

Let’s hope we don’t have to wade through another two albums before we get to hear more new Drudkh material that’s worth its salt. For now, all’s well in the Drudkh camp, Ukraine’s political crisis notwithstanding, of course. 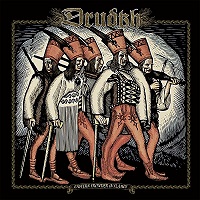