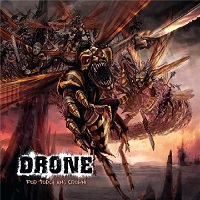 Have you seen the cover to this new release

? It’s quite horrific looking and there’s a frantic feeling found in the striking images of an army of insect warriors charging forward in a swarm. I’m digging it, but when it came time to listening to the 10 tracks associated with the gruesome image, I was a bit disappointed. I was expecting forward-thinking thrash, but what I got was a jumbled mess of groove-tinged thrash metal post something or other. I slap my hand to forehead trying to decipher the myriad of labels used to describe the music, and in this day and age, labeling is everything.

Drone for the most part is broken down into many parts musically. The galloping thrash riffs dominate the music with fist pumping ferocity, and that is layered with a heavy dose of melodic groove. At times, vocalist/guitarist Mutz Hempel does his best Robb Flynn impersonation on tracks like “Deepest Red” and “Croak in Your Waste”, but he mixes this up with the cookie monster growls largely associated with Chuck Billy’s death metal attempts on Demonic. For some reason I cannot get that association out of my head, and it might not be a fair comparison when all is said and done.

At least with a band like Testament they can vary their sound to dramatic effect, but on a release like this, I find the lack of originality hurting the overall product. This surprises me a little given the lineage of being a German band; you would figure homage to Teutonic thrash more appropriate than going the post metal genre route and calling yourself a metalcore band. I digress though, and getting back to the guts of the release is a tall order. There’s just not enough meaty riffage for me to get fully behind liking the band’s third release, and that’s a shame.

A few standouts like “Making Believe” and “Burning Storybook” are solid thrashers from start to finish, but beyond that it gets thinner than ice as you get deeper into the track listing. I would say this album is good in parts, but it offers nothing unique or different as a whole. So if you like post-thrash/groove metal/metalcore then give this release a try, but if you are a purist like myself, then you might just skip over this and pick up the latest Testament orMachine Head