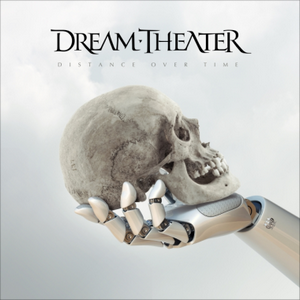 Though by now you have likely been introduced via one of the three singles leading up to its release, to answer what is likely the biggest question many have: no, Distance Over Time is nothing like The Astonishing. It’s the most concise Dream Theater album since the ‘debut’, it curtails bombast, the rhythm section is thick and present throughout. Fortunately, perhaps in its most shining feature, it only features one semi-ballad, penultimate track ”Out Of Reach”.

Of course this album follows the band’s celebratory 25 year anniversary tour of Images & Words and it is unsurprising that is a reaction to that touring experience (ahem, among other factors). So here we are with a classic ‘return to roots’ kind of experience, at least in theory. Train of Thought served a similar role in 2003 and likewise multiple albums since have in some been hailed for a return of something previously let go. The classic role of what was old is new again, playing out over and over again. Dream Theater has a formula and it serves them well, it works.

And that is to say you, dear listener, will find zero surprises across Distance Over Time. Introductory single and lead off track “Untethered Angel”, with its acoustic intro and infectious chorus serves as a cross between “The Enemy Inside” and “On The Backs Of Angels”. It’s thick, features the requisite solo breaks for Petrucci and Rudess but limits them, keeping things to a relatively tight six minutes. Indeed, economy is a focus of Distance Over Time, nothing here breaks the ten minute mark. Whether or not that’s a positive really depends on where on the spectrum of musical nerdery you tend to fall. The band’s musical chops show up enough and don’t really need to be elaborated upon here.

As the album progresses usual wickets are hit: “Paralyzed” is entry four or five in the band’s pantheon of conjuring the spirit of radiorock circa (…and since) 2002 and not dissimilar from “Build Me Up, Break Me Down”. It carries the DNA that built numerous songs on the Mike Portnoy project Sons of Apollo, particularly “Alive”, the radio-friendly crunchy coupled with a more classic instrumental break. Bland choruses lead to more enjoyable instrumental exchanges in “Barstool Warrior” and “At Wit’s End”, the latter being the longest track here. Complementing all the assorted ‘metal’ points of focus, closer “Pale Blue Dot” is the most ‘progressive’ and a fitting way to close things out.

Regardless of where you happen to fall in Distance Over Time, Petrucci dominates everything. Whether in pushing direction in the songs or how they progress from movement to movement, even the keys have largely taken a following position to guitar. Perhaps a reaction to the reception of The Astonishing, but palpable all the same. LeBrie is unoffensive and largely stays out of the way. The songs are shorter so he tends to have more time in the spotlight but he does what he needs to do. Myung and Mangini are each well represented, always in support roles but now given a roomier place in the mix. As mentioned already Rudess too seems to play more of a support position though he is given ample space to solo on his own or duel with Petrucci throughout.

It’s a solid experience. Distance Over Time is fitting for several reasons, chiefly as you can pick out hallmarks of every previous album and era across it. Innovation of course can’t be particularly expected of any band after three decades, at least not consistently, so to that end it’s an okay experience. Nothing is old but nothing is particularly new but it all functions well enough to throw a number of new tracks into the live rotation and keep rolling. Again, it’s okay. That’s not intended to downplay it, not that it’s just okay. It really is okay.