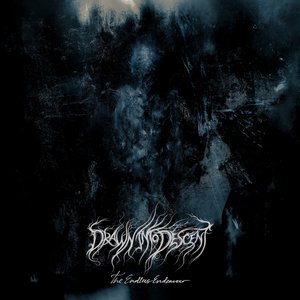 The liminal space – the space of transition. Here in the NCR that’s currently the fringe area between the forward jump of the clock and the first day of spring. Winter, as has been said, is dying. But for every foray into the sun-lapped brightness and low 70s, we have other days that struggle to make the 50s, the last gasps of the darkened months being left behind.

Whether intentional or not, Drawn Into Descent’s The Endless Endeavour lands at a fitting time as it embodies the above idea. Sonically sitting firmly within the ‘atmospheric/blackgaze’ pantheon, for those inclined to the style there is much here to love: traditional black metal passages that give way to warm, lengthy post-rock explorations. By the same token if you’re not keen on the style it isn’t going to change your mind.

Though there are five tracks on offer there are effectively four works as “Death…” and “…Embrace Me” serve as thematic and functional companions. They’re each winding, multi-part affairs. Opener “Dystopia” opens in an almost surprisingly traditional way. A bleak and frigid sprint away from some distant horror. The execution is very solid here. If the band had focused entirely on this aspect of its sound to the exclusion of all others it likely would’ve still made for a stellar release. It doesn’t take long for the guitar to open up and things veer off the frosty path. Melody rides at the forefront and it evolves on a journey all its own as the song journeys toward its conclusion.

Those themes reemerge and withdraw throughout The Endless Endeavour. Aforementioned two-part work notwithstanding, the remaining tracks linger with similar lengths and subsequently can blur together as the pillars of light and dark oscillate in the listener’s focus. Perhaps most surprising is that there are no clean vocals to be found here. Perhaps less surprising considering the regular instrumental forays but when they do come forward, they’re of traditional depressive-black stock, somewhere between a pained wail and the classic shriek.

For the season and for the genre fan, The Endless Endeavor is a good time. Postblack releases have been a dime a dozen the past few years but fortunately without resulting in the same genre-rot that followed the deluge of raw post-metal a decade ago. Follow the light before the liminal state closes and we’re firmly in the grasp of the sun for another half a year.