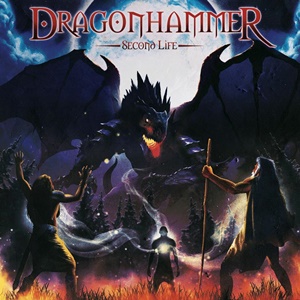 Familiar with the last two studio releases from this Italian power metal act, Dragonhammer returns for Second Life – their fifth record and first in five years. Struggling in the past to move away from obvious bigger name influences beyond the lack of proper, game-changing vocal presence could make this record a bit of game changer, especially considering the loss of founding guitarist Max Aguzzi and drummer Andrea Gianangeli after the release of Obscurity. These eleven tracks explore elements of epic, symphonic, and neoclassical textures beyond the normal power metal treasures present in the uplifting melodies, thunderous hooks, and majestic atmosphere present.

The churning guitars, pumping sixteenth note drumming, along with supportive triumphant keyboard support allows “Into the Warrior’s Mind” to be an illustration of the proper understanding of Rhapsody-like cinematic splendor against Blind Guardian-esque charge worked to perfection, latest singer Mattia Fagiolo capable of accessing his gritty mid-range plus soaring high register action. The tranquil orchestration feeds into acoustic textures for “Fallen Brother”, a moving power ballad featuring an emotive, bluesy-driven guitar break to put the band into rarefied air beyond the normal fare one expects on these records. The knack for many Italian musicians to inject some dance groove ambiance into the metal mold keeps this style fresh even at faster paces – “Silver Feathers” another highlight between Mattia’s confident vocal melodies as well as the shifting paces / interplay, dropping in some Celtic vibes for a dynamic buildup to the next dueling axe/ivory instrumental action sequence. Many will close their eyes at the fantasy/soundtrack-like atmosphere exuded in the finale “Ending Legacy” – a five-minute plus orchestral piece that ties the record up in a wonderful bow.

Where Dragonhammer seemed a bit too stiff in stepping outside of the box on previous records, Second Life indeed speaks to a sextet willing to challenge any boundaries placed before them – stretching horizons to incorporate a wide array of influences. This might be the hidden gem worthy of deeper appreciation, hopefully sending the band on an upward ascension for more respect, better engagement, and stronger festival/touring opportunities.