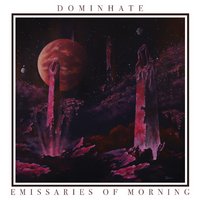 One has to tip the hat to Lavadome Productions as of late. They’ve been knocking it out of the park in signing nothing but the highest caliber death metal offerings (see Zealotry, Apparatus, and Ad Nauseam for starters). Newest upstart Dominhate furthers this trend, bringing in an old school sound that doesn’t stick to being old school for the sheer sake of doing so.

What Dominhate manages to do throughout the stay of Emissaries of Morning is use the old school sound, with plenty of Incantation/Immolation/Morbid Angel-isms, but doesn’t keep things with both feet stuck back in a timewarp to the early ‘90s. This is thick and monstrous death metal that is unafraid of its roots and heritage, but allows the band a modern vibe that bolsters things into even heavier territory. Take the doomy Incantation vibes of “Awakening Confessiones,” where the dark and lumbering riffs share space with bestial vocals and thunderous drums – a familiar sound but taken to a less crowded space through a crisp production that doesn’t render the track modern sounding, but doesn’t keep it to the cavernous depths that many tend to go in recently. The riffs are smartly catchy (see “Immolation Carmen Astri” for a great example of this), in a death metal fashion, and the short length of the EP ensures you’ll be going back to it plenty to get your fill.

While not revolutionary, Emissaries of Morning is a potent batch of death metal goodness that neither leans too far into the past nor brings it into the sometimes sterile present. There’s much potential to be fleshed out with the next full-length to come, given the band’s tendencies to write some hook-laden material while keeping the brutality at a maximum. A solid thumbs up for this EP.