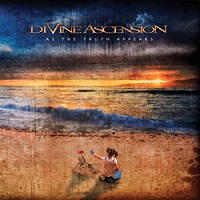 Alas, the Australian take on female-fronted symphonic metal has arrived. As our own Justin Donnelly would tell you, Australian metal is a mixed bag of tricks, with the country unable to lampoon one style and call it their own, so they pick and choose as they please. Such is the case for Divine Ascension, who have assimilated every facet of female-fronted metal into theirAs the Truth Appears debut.

Fronted by Jennifer Borg, Divine Ascension fall more on the progressive/power side of things than Goth, which bodes well for the band’s superlative chops. Lots of nimble guitar runs and keyboard breaks are filled in between Borg’s dramatic, hair-blowing-in-the-wind vocals, and for the most part, it’s the right way to go. Borg has quite the voice

on her, but she doesn’t quite have the presence of a Sharon den Adel or Tarja, and that’s understandable – it takes years of seasoning to reach that mark.

Nevertheless, Borg swings for the fences on the chirpy “Ascension,” and adventurous “Guided by Osiris.” Her vocal patterns and cadence are clearly of the mature variety, thus allowing her to wade through some rather familiar prog/power terrain on “Another Battlefield,” and the triumphant-sounding “Unscathed.”

Divine Ascension is entering into very crowded, but uninspiring field, something that should give them the impetus going forward to improve upon As the Truth Appears. From this vantage point, DA is a few tweaks and alterations away from the having the kind of breakout Within Temptation had with Mother Earth. For now, the band can safely revel in the fact they’re really the only band of this kind in their homeland to giving a hopping kangaroo about…