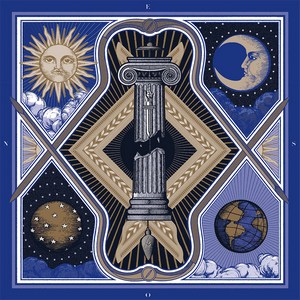 When you dive further into the post- scene, it’s a matter of atmosphere that really makes all of the difference. Bands with that ‘it’ factor tend to move up the ranks, while others are left behind in the dust. Embracing a slew of influences and sonic landscapes, French act Déluge looks to make a name for themselves with second album Ægo Templo, by creating a reflective and melancholic listen that still retains a level of grit and intrigue.

It’s tough to really peg Déluge with the black metal tag, even if some occasional elements to take it in a post-black direction. Instead, the merger of those elements (particularly the speedier, blastbeat-driven segments) with some more somber melodies and introspective moments of eeriness and quiet give them a distinctly different feel – just take in “Opprobre” and watch as the band moves from relentless moments of frantic speed with urgent barks and unhinged riffing to a mysterious and eerie interlude to later moments with clean vocals and groovy melodies. The band doesn’t resign themselves to a single direction, and they make it work for them. You are on your toes to see what may happen next, which gives cuts like “Gloire Au Silence” an added level of wonder, as they switch gears regularly while providing a coherent form that brings you in with their gradual movement into melancholy and beauty after some throttling moments of aggression. Some songs, like “Beryl,” bring the doom and gloom up further and create a dark atmosphere that borders on doom underneath the post-metal urgency. That sense of urgency is really what pulls all the tracks together, and keeps the listener ready to follow the band where they want to head next.

Ægo Templo pairs furious moments of blackened speed with some dreamy (and occasionally dreary) melodies that should pique the interest of any potential listeners of extreme music. Déluge handle grace and ferocity well, and have set a solid template for the future with this second release.