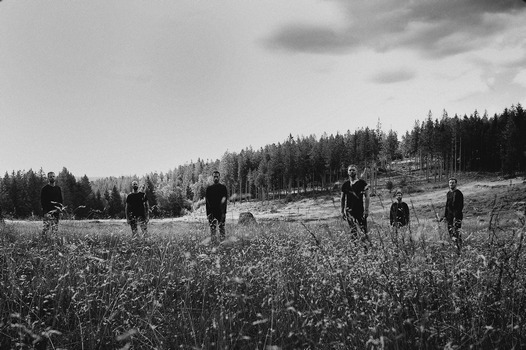 As black metal is a genre ripe with the potential for offshoots in sound, French act Deluge is taking full advantage of it. Taking the sound as an influence rather than wanting to simply imitate it, Deluge conjures up a more cerebral and elaborate approach to extreme music that utilizes a somber atmosphere that is also in tune with post-metal and other sounds, rather than sticking to one field. It makes for an immersive listen that is full of emotions – be they hopeful or downtrodden. Their new album Aego Templo is an experience that will offer bouts of adrenaline while nurturing the mind too. We spoke with guitarist François-Thibaut Hordé to get his thoughts about the new album, black metal inspirations, and much further insights into Deluge’s sound.

Dead Rhetoric: It’s been five years since Aether. What have you all been up to?

François-Thibaut Hordé: It’s been a long time, but we toured intensely for about two years between 2015 and 2017. I wanted that time to spread Aether, because to me it was an important album to make. I had a lot of things to tell people at the time and I didn’t want to make a second album like Aether. It would have been quite easy because I had inspiration, but sometimes you have to stop before making a record. I really wanted a gap in the writing process. In 2017, I had some big professional issues that were unplanned that took time to go through with. At the same time, I did start the creation process for Aego Templo. I had a beautiful daughter, who was expected in early 2018 – so it was planned but not the time. The professional issue was a bad one, but the birth of my daughter was a good one. We managed to compose Aego Templo from summer 2017 to November 2019.

So we finished the creation of the album last last year, and started recording in December after the creation process was over. But some tracks are already three years old. It’s funny because we discovered them with a new, fresh sound.

Hordé: It goes in different ways. The essence of the music is the same, the type of melancholy we had on Aether. But the support is different. I really think it’s easier to listen to and accessible, even if it has the same spirit. Aether was easy to make because I had so many ideas at the time. It isn’t that I didn’t have any ideas for Aego Templo, but when you have your first album – Aether was quite a success for an unknown band, especially in France. People are waiting for your second album. I didn’t want to disappoint them, but I had to choose a way to make something different. I really do love our first album, and I’m still really proud of it. It’s not a mistake or whatever, but Aego Templo is more mature and it has improved a lot more.

Dead Rhetoric: Is it important to bring things forward and try new things with each new album?

But we wanted to go further with this album. To me, I love the primitive analogy to black metal. We aren’t even a black metal band, we are a heavy music band that takes inspiration from black metal. That’s taking a risk and trying to do something different.

Dead Rhetoric: You were involved with the production this time – do you feel it aids in having a more personal touch to it?

Hordé: I wouldn’t say mistake, but one thing I regret on our first album is that I didn’t have a lot of communication with the sound guy, even if I liked the sound. I really wanted to keep more control of the production for our new album. To let people work, but also communicate with them. The result has been very interesting. It’s more personal – I have some knowledge of sound engineering, but not as much as our sound guy has.

It’s still important to delegate, but when I talked with the sound guy I told him ideas and feeling that I want people to listen to when listening to the music, but I don’t have the technical terms or engineering to do it. But it was important to keep control, as I am involved in managing all parts of Deluge – how it sounds, the art, and the lyrics, but it was also important to let people work when they know things better than I do.

Dead Rhetoric: You mentioned the artwork. The artwork has a consistent vibe from Aether with the colors and way that it is drawn. Is this something you were shooting for?

Hordé: Honestly, this is the part I mostly delegate. For the first one, I had a few ideas of the meaning of the elements, but for the second one I had a stronger idea of the elements and I didn’t want to have the same scheme. But you can feel that it’s the same artist that did both. I think it was an idea of the artist, Valnoir, to create a stronger identity. The term deluge speaks to water, and we wanted to use every state of water to compare it with emotional states on Aether. For Aego Templo, it’s not the same meanings, but the identity remains the same. It is important to us to have that identity.

Dead Rhetoric: What can you say about the mood of the album?

Dead Rhetoric: Is the ‘AE’ album title something you are going to stick with?

Hordé: Yeah – it’s a part of our identity. It would be a bit complicated to deeply explain the meaning. But Aether was the feeling of emptiness – the emptiness between two things: people, planets, whatever. Without emptiness, those two things couldn’t exist. So everything is important in the end, so that was the meaning of it. In Aego Templo, the AE is the temple of the self. It’s more about constructing yourself. In order to do that, you have to look into the void, into the emptiness, and that’s an important part of the construction of the self. It’s how you see the world, and it’s what links the two albums together.

Dead Rhetoric: What are you most happy about with Deluge?

Hordé: I wanted people in Deluge because I like them, as well as their musical skills. I’m 34 this year, and I have been doing music for 20 years. I had some good times with people who weren’t really good musicians and some bad times with great musicians. This is the first time I had to build a team. Being on tour with these guys – I love my family and daughter, but I know that when I leave to go on a tour for a few weeks that I will be having some great moments with the band. This is one of the greatest things of the band. We did one of the biggest festivals in Europe – Hellfest in Europe in 2017. It was great to end that first chapter of the band with such a great festival and the crowd was packed. It was a great moment. As human beings and musicians, it was a great show. A very nice time.

Dead Rhetoric: There’s a black metal base underneath the band, but obviously you don’t stick with it. Do you feel that black metal is a genre that can help to boost a sound without having to stay stuck in its boundaries?

Since we didn’t want to be stuck in the black metal code, I think it’s a smart move to do this album. It’s not a mark of disrespect. We used to play only black metal shows, and the people still seemed to like it. To be honest, I was expecting a lot more disappointment from true black metal fans. Instead, we got a lot of people who were surprised by the music but felt it was fresh and they enjoyed it. That’s one of our strengths to use that energy without being stuck in the rules of black metal.

Dead Rhetoric: Are there any plans yet for 2021?

Hordé: That’s the question on everyone’s minds now. We have a tour in France in the beginning of December. It is a 100 person show, but it’s a great victory because no one in France was expecting shows before 2021. It seems like we will be able to do these shows. Its great news for us, and with the pandemic, we have a lot more time to do the promotion for the album. The situation isn’t easy, and you never know if you can play the shows or not, but we are trying to use the time to prepare ourselves for when we can play them. We also have a few videos and collaborations coming up too besides the album, so it’ll be a nice release anyway [laughs]. We can only hope for the best with this situation, there’s nothing more we can do. 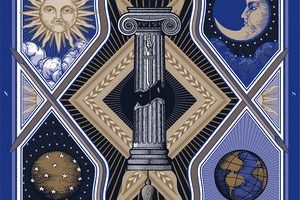