Dark Tranquillity – We Are the Void (Century Media Records) 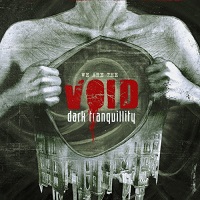 Frankly, this was the only place DT had to go at the moment. They’ve once again exhausted their standard melodic death metal template with 2005’s Character and ‘07’s underwhelming Fiction, so back to the synth-induced space of Haven we go. Not that we’re complaining, as Haven is grossly underrated and in due time, We Are the Void might find itself in a similar situation.

For all of the Goth swashes this album has all over it, there are still bounties of melody and pulsating rhythms. Just reference the opening quake of “The Fatalist,” a number that combines the swift melo-death angle the band is so accustomed to with the draconian keys of Marten Brändström, who is arguably the album’s MVP. Brändström plays a major role in defining “In My Absence” (which is the best song

of the bunch) as well as “Her Silent Language” and it’s a welcome respite from the guitar-driven antics of the band’s last three albums.

vocals courtesy of Mikael Stanne return on “The Grandest Accusation” and the above-mentioned “Her Silent Language.” Initially, this may draw frowns from those who recall the man’s album-ruining work on 1999’s Projector, but Stanne appears to have found a suitable place for these. However, the lanky Swede has got into the very noticeable habit of recycling the same vocal pattern from previous efforts (i.e. Damage Done) and if it weren’t for his always discernable and convincing rasp, this would be a huge detriment.

As the only band that has remained totally true to the Gothenburg sound, it is that exact approach that has come to be a double-edge sword for Dark Tranquillity. The last album that garnered any real intrigue was Damage Doneand we’re approaching 10 years since its release, which tells us that DT has realized they’re a bit too comfortable in their britches considering the abundance of experimentation going on with We Are the Void. That, or it’s plain-as-day that they’ll forever be second fiddle to the now reeling In Flames. Strange how things work out when you stick to your guns.