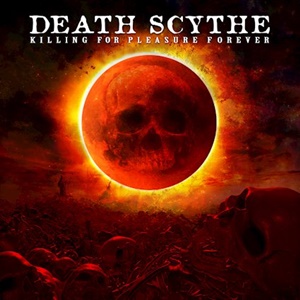 These days its common to hear of bands taking a second crack at developing their style and brand appeal. Death Scythe belongs in that camp – originally around during the early 2000’s, releasing two demos plus a full-length Killing for Pleasure before taking a decade-long break. They would play live shows again in 2018, develop new songs for the second album Descending into Xibalba released in 2020 – then play some online festivals with artists like Jinjer, Shokran, and Arise in Stability while reintroducing people to the latest version of that debut album. Killing for Pleasure Forever contains thirteen of those original fifteen tracks, updated with better production values plus the insight/knowledge of the musicians on hand – the current rhythm section getting a fresh crack at these tracks since they were not a part of the group in that first incarnation.

The Mexican quintet live for a classic melodic death style – weaving those indelible guitar melodies around sturdy mid-tempo to slightly faster rhythms, the bass/drum interplay also navigating in and out of groove metal, metalcore, and expected death platforms. The exotic chord runs, shifting tempos, plus melodic stop/start touches push “Touched by A Scythe” to highlight reel territory, as vocalist Gerardo Mendoza uses various growl/scream tactics to get the words across forcefully. It’s evident in key sequences of “Wind” and “Hollow Darkness” that these guitarists know their way around specific In Flames and Dark Tranquillity signature aspects to that Swedish template, while there is also some progressive / thrash injection to “Lost in Eternity” which comes from the Megadeth mold. By the time the Maiden-esque spider web-filled musical movements penetrate closer “The Death Scythe”, most listeners will leave battered and bruised at the vicious, aggressive nature that takes place next to these highly catchy riffs, swinging rhythm section mechanics, and impassioned scream/growl switch offs.

Normally revisiting older material is seen as a cash grab – in the case of Death Scythe, it’s bringing to light songs that probably needed stronger production values plus maturation on the musicianship front to achieve the best results. As such, Killing for Pleasure Forever stands up well in the current melodic death metal climate, hopefully attracting a wider following globally.