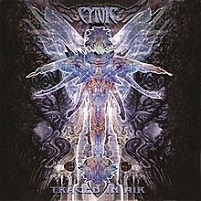 releasing one solitary album (see: Watchtower, Spiral Architect, et al), Florida’s Cynic return after 15 years with Traced In Air. The longevity and influence of 1993’s Focusis not something to be underestimated, and even though the band broke up barely a year after its release, Focus remains the quintessential progressive death metal album of the 90’s.

Cynic circa 2008 consists of singer

vocal approach, one that is usually off-set by the growls of Kruidenier, creating a back-and-forth dual between the graceful textures of Focus and the more angular slice of Traced In Air. Masvidal’s heavily-layered vox are the focal point on “Adam’s Murmur,” a stunningly precise, yet hypnotic number that is given an adrenal boost in quick

bursts from Reinert, who picks his spots very well throughout the album.

Lead single “Integral Birth” is perhaps the most memorable number of the bunch, as a virtual cascade of glimmering melodic guitar

runs collide with Reinert and Malone’s air-tight rhythm section. “King of Those Who Know” develops gradually, only to slowly settle in as Masvidal’s thoughtful vocals take form. “Evolutionary Sleeper” is the busiest number of the bunch containing an array of jumbled, yet coherent riffs and those legendary stop-start dynamics that were in high-demand on Focus.

Album closer “Nunc Stans” (which is the bookend to opener “Nunc Fluens”) takes on a new angle for Cynic, as Masvidal’s robotic, computerized vocals spread the wings in one of the rare dreary moments on the album, ending this 8-song affair on an uncomfortable, almost post-apocalyptic vibe.

The metal world is very different place from when Cynic was firmly embedded on Roadrunner and at the forefront of the technical metal movement. Fifteen years can do a lot to a band and to its individual members, but it’s safe to say Cynic is greater than the sum of its parts and Traced In Air is clearly the culmination of years of waiting, pining, and plotting.

This is fact and not because of the giddy-excitement over having the band back in action – Traced In Air is a masterpiece through and through, and for once, we get a reunion album that is worth a damn and better yet, a collection of songs that will hold up for generations to come. Simply