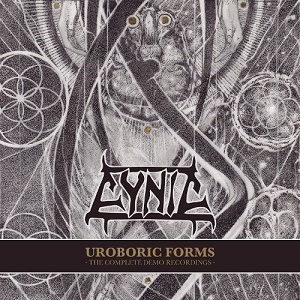 While the current status of Cynic remains fluid (neither Paul Masvidal or Sean Reinert have made a definitive statement in well over a year), the band’s highly-regarded demo period is getting its just due by way of Uroboric Forms – The Complete Demo Recordings. A collection of all four of the band’s key late ’80s/early ’90s demos, Uroboric Forms shows just how vital and lively Cynic was as they progressed (pun intended) into their legendary debut, 1993’s Focus.

The more recent Cynic has displayed a progressive-lite touch, even ditching some of their primary metal elements. The material here, though, are total progressive death metal works. Masvidal is in full Floridian death metal growl mode, oftentimes resembling his former Death bandmate Chuck Schuldiner on “The Eagle Nature,” culled from the band’s 1991 demo. The interplay between Reinert and then-bassist Tony Choy is simply electric, with the two creating an active, carefully-constructed field of drum and bass action, as so captured on “Thinking Being” and “Cruel Gentility” from their 1990 demo.

The production on the 1990 and 1991 demos is top-notch, with the band utilizing the services of Morrisound Studio, the undisputed hotbed for Floridian death metal. The Reflections of a Dying World demo is the roughest of the bunch, finding Cynic ensconced in thrash; the same bodes for their 1988 demo. As an additional bonus, the vocalist audition tapes from the unknown Brian De Neffe are excellent, begging to wonder why Cynic didn’t add the man to the band.

Because very few of these songs made it onto Focus, they’ve achieved exalted status, and rightfully so. By the time Roadrunner signed the band for Focus, Cynic was already moving away from death metal, but Uroboric Forms – The Complete Demo Recordings is a brilliant snapshot in time.