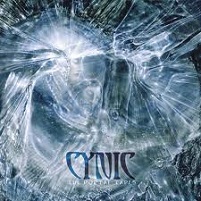 Prophets Cynic are not, yet they did see the writing on the death metal wall around the mid-90’s, so that counts for something. At that particular point in time, the death metal scene was swelling to uncontrollable proportions, with creativity at an all-time low and labels signing anyone who could mimic Cookie Monster and palm-mute some diminished chords. Pair that with the then-burgeoning black metal scene, and death metal circa 1994 to 1997 essentially had no chance. As it stands, Cynic officially broke up in 1994 and formed the short-lived Portal, which is the point of discussion for this review.

One could see where Cynic wanted to go with Portal for their eventual reformation album, 2008’s Traced In Air. The lush dynamics of “Endless Endeavors,” “Costumed in Grace,” and “Road to You” demonstrate the band’s ability to take prog rock and make it flow like a river, a cerebral river at that. Abrams’ vocals are suitably poised and reserved, blending in seamlessly with supple keyboard strokes and ambient uh, ambience. There’s a dearth of the progressive metal flair the band showed on Focus, as the songwriting mode of “Karma’s Plight” and “Crawl Above” showcase a jazzier, more free-form side to Cynic that was practically itching to come out a few years prior.

Cynic’s new-age crowd might find something of value with The Portal Tapes, as it’s a direct reflection of Traced In Air and last year’s Carbon-Based AnatomyEP. The old death metal crowd that helped break the band won’t have anything to do with this, and methinks had they heard something like this in 1995, then they’d be running back to their Broken Hope and Monstrosity albums almost instantly.