Where else would a band like this come from besides the UK? From the country highly notorious for its long-lasting upsurge of radical musicians, Cultfinder bring it on old-school with their thrashy crust-punk/primal black metal style. In their latest work, Hell’s Teeth, Cultfinder clatter, smash, and claw their way through their own teeth-gnashing bloody hell.

Hell’s Teeth is brazenly blasphemous, immodestly unholy, and obscenely devilish. Titles like the thrashing, bashing “Drink to the Devil” and the hellish erotica of “The Devil’s Whore” make the noted characteristics quite obvious, almost so much so, they could be rendered as mediocre. However, Cultfinder strike the hammer with such boldness that it’s hard to totally dis them for their archetypal themes. Hell’s Teeth is an ideal choice for something like a protest, a rally, a beer party, or anything that turns a crowd into a riot.  Cultfinder dictate their sound with utmost recklessness, but they also make an attempt in the oppositely mellow/ambient direction. The bleak “Heathen Visions” and tantalizing “Unholy Orders” show that atmospheric delicacy is not their specialty. If these two songs were made of a substance brittle as they sound, the other pugnacious tunes would gang-up and break them like glass. For Cultfinder, it’s less about the artistry of music and much more about the terrorizing, hateful, inhumane noises wrung by abusing masochistic instruments.

Cultfinder are three hooligans with an apt for making noise. Maniac guitarist/vocalist Rob Belial, rumbling bassist Necroskull, and hell-hammering drummer Wilbeherit are a rambunctious trio who take us back to the primitive sounds of raw garage-band quality metal, with all the essentials. Rampant, enraged, sinful, and wild, they don’t hold back anything, and probably don’t take shit from anyone either.

What would the teeth of Hell look like anyways? Imaginatively, somewhere on the lines of putrid, rancid, and just plain nasty – that’s basically the feel of Hell’s Teeth, but Cultfinder’s nastiness isn’t sickly or vile, it’s wicked and beastly. Those fond of slaughtering, nasty metal with rock-hard rhythms, plus anyone still keeping up-to-date with the UK’s rebellious music scene, ought to add Hell’s Teeth to their collection. 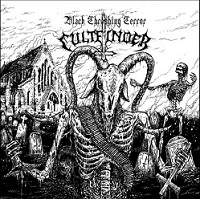