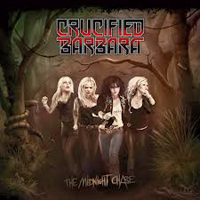 Since everyone in Sweden is either tall or good-looking (which also aptly describes yours truly…according to my stepmom), Crucified Barbara easily pass the eye test. And since it doesn’t take a whole lot to impress unimaginative metal dudes in that department, the fact they can pull together some of the best post-Runaways bad-girl biker rock also helps. After years kicking around in the European rock and metal underground, the Swedes appear to be poised to make a serious move with their third album, The Midnight Chase.

Running against the predominantly 2012 female sludge/Southern rock current, Crucified Barbara’s brand of stripped-down rock and metal packs plenty of sass and attitude. There’s plenty of “don’t fuck with me or I’ll kick you in the nuts”-styled rockers heading down the highway, including opener “The Crucifier,” which could be seen as the band’s anthem, with its revenge-based lyrics and all. “Shut Your Mouth” is even more fun, with a chorus that is as suggested, rather pointed.

Lead single “Into the Fire” kicks it with some 80’s metal crunch, while album highlight “Rules and Bones” sees the band temper the pace, with lead singer Mia Coldheart (such a good stage name) enjoying her finest moment on the album thanks to a glistening chorus. Elsewhere, the full-throttle metal jams like “Everything We Need” and “Rock Me Like the Devil” are aided by a rock sensibility that gives both cuts a blatant degree of catchiness, especially the gang female vocals come and join the party.

Probably the best representation of the dog and pony show that is female-fronted rock/metal, Crucified Barbara are the total package. As such, The Midnight Chase will probably the introduction for many to this band who in the span of three albums, have managed to inject some much-needed validity and charisma into a very clichéd presentation.