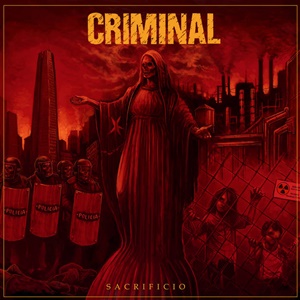 Creating their ninth album as outsiders looking in at the social strife from their upbringing in Chile, Criminal channels that aggressive upheaval and turmoil for Sacrificio – a twelve track salvo that fans of the four-piece should find solace and familiarity through its death/thrash meets groove metal stance. A battering ram of Latin American roots and underground influence of the 80’s/90’s global scene, the ferocity present allows the chaos to be direct, focused, and sharp on all fronts. Vehement in its opposition to tyrannical leadership, government control, and the great divide between those in power and those ordinary citizens struggling to gain any sort of normalcy, the band offer musicianship and songwriting that speaks to the afflicted.

Extremely rhythmic in terms of the vocal roar, guitar riffs, and pummeling drum tempos, most listeners can easily be swept into this circular aural swirl of instrumentation and screaming plus the mid-tempo swinging/groove-laden transitions that artists like Sepultura, The Haunted, and The Crown deliver. Guitarist Anton Reisenegger has that Max Calavera-oriented militant bellow down as a veteran should – his work in “After Me, The Flood” and the mid-tempo meets crossover “Zealots” snapping heads to alert mode, beyond the swift shred runs of second guitarist Sergio Klein. Acceleration in the blasting department takes “Dark Horse” into hyperspace for drummer Danilo Estrella, yet he balances out those higher BPM’s with a groove-like nuance in controlled passages for the chorus that creates more audience/tribal-like chant movements. Intertwining aspects of progressive, off-time sequences during “Hunter and the Prey” allows Criminal to inject more dynamics into the proceedings – as its evident that the quartet know their way around the death/thrash and groove-metal movements. The production values and overall tones translate well from the studio to stage – the arrangements very much lean and mean, perfect for vinyl consumption.

Sacrificio is an optimal record for those who want a juxtaposition of already familiar influences constructed in a way that delivers aggressive thrash/death in a headbanging fashion. Entertaining as Criminal can be, the lack of originality probably keeps the band in a holding pattern for a wider following. 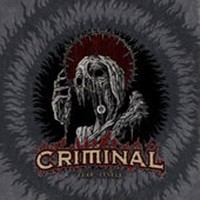