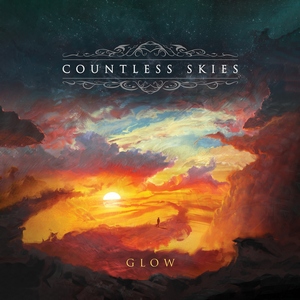 We’ve been following melodic death metal act Countless Skies since finding them on Bandcamp with their 2014 EP. Full length debut New Dawn was a potent piece of majestic melodeath back in 2016, but it’s been a long four years since. With a new label in tow, Countless Skies have made a triumphant return with Glow – one that sees them upping the ante in almost every way while continuing to be true to their sound.

Glow simply sounds more massive in comparison to their debut. All of the bits and pieces that made it up have been elevated and made more meaningful in some creative ways. While the progressive influences have grown too (such as in the 3-part, 20-minute title track), melodic death metal is still the appropriate first reference point. These guys know how to write some wild melodies that straddle the epic and yearning sides of the genre with aplomb. Opener “Tempest” gradually builds itself up naturally with dreamy riff sequences and some ethereal melodies sprinkled with some soaring clean vocals. Also digging into both acoustic and blastbeat-driven segments as well, it’s a wonderful introduction to all that the band can do in a single cut.

The melodies continue to be the band’s finest quality, and it’s also where they have shown some growth too. Here the range is more varied and the more obvious influences that one could hear on the debut have been shed a bit in favor of some proggy and melancholic ones. Midway point “Zephyr” is the most striking one here, with a more gentle approach than much of the rest of the album and some delicately interwoven bits near its center have an almost post-metal urgency to them that sets the track apart. Finishing off the album with the 3-part “Glow,” here the band gives deeper into more progressive elements and takes their time with the extended nature of the track. “Part I” showcases some beautiful leadwork that is truly touching and grand in scope at its tail end, while “Part II” is the more direct and energetic, though the finale does a nice job of keeping pace with it while adding a more epic and almost cinematic feel to end on.

Glow manages to impress with its moments of melodic bliss that capture the listener throughout each track. Countless Skies has really spent some time polishing this stuff and making sure to up the stakes with each player in the band. This is an absolute must if you enjoy melodic death metal or progressive music in any way.