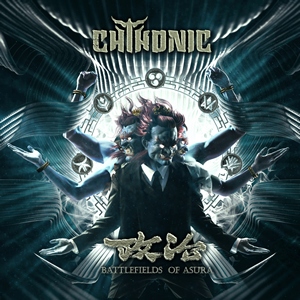 Certainly the most well-known of the Taiwanese scene (and arguably all of Asia), Chthonic have been laying low for a few years since 2013’s Bú-Tik (though a few smaller releases and a film did surface in the meantime). But, much of that has to do with frontman Freddy Lim being elected to the Taiwanese Parliament, so it’s expected that there would be less time for the band. But Battlefields of Asura brings forth Chthonic’s first full-length in five years, and it is an album more than worth the wait.

Whereas some of the band’s first releases were more rooted in some black metal traditions, every passing release has gravitated more towards Taiwanese folk music, with metal layered atop. Battlefields of Asura continues this movement, with plenty of Taiwanese folk music at its foundation, which allows the album to feel more unique than most releases of this ilk. The way that the Eastern sounds combine with synths gives it an even greater sense of wonder to it, as “The Silent One’s Torch” quickly makes evident. The riffing style and structure at this point resembles more of a melodic death framework, and many of the songs benefit from a galloping tempo that is chockfull of memorable moments. Whether it’s an upbeat synth insertion, breakneck riff, catchy lead, or use of more traditional folk instrumentation, each song benefits from a combination of all the parts coming together to create a stronger whole. Even with the varied instrumentation, they still bring some pretty heavy moments, which “Taste the Black Tears” makes very apparent.

With the band’s continued narrative (Battlefields is a precursor to the overall story), it does feel like a complete journey by the end. At a pleasant 40-minutes, it also doesn’t overindulge with the details yet feels focused in storytelling. Battlefields of Asura may just be Chthonic’s strongest release to date, with plenty of melodic and theatrical aspects to enjoy while keeping a razor-sharp edge and folk-y diversions to make it even more well-rounded.