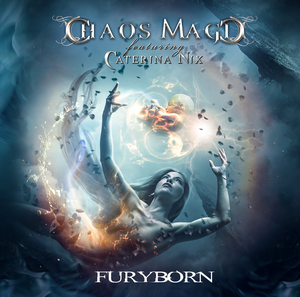 With a first album that was done in collaboration with Timo Tolkki four years ago, Chaos Magic returns for a second album that is meant to have vocalist Caterina Nix stand up on her own along with songwriter/guitarist Nasson. But they aren’t completely on their own here, as they have managed to assemble a stunning entourage of guests, such as Tom Englund (Evergrey), Ronny Romero (Rainbow), Ailyn Gimenez (ex-Sirenia), and Mistheria. In the end, Furyborn accomplishes its mission and soars above it.

While there’s clearly a number of selling points for the album to be made with the guests, it is really the sense of tightrope walking that makes Chaos Magic work. There’s a mix of different influences at play, with elements of more modern metal (Jacob Hansen’s mix helps here) siding with more classic symphonic metal moments for one thing. But they also put together the heaviness of metal with more direct, rock structures and hooks. While it’s nothing the world hasn’t seen before, there’s also no denying how catchy and memorable each track due to the sum of these components. Caterina Nix’s vocals are going to be at the forefront throughout, and she proves herself to be quite formidable from the onset. From the heavier cuts like “Throw Me to the Wolves” to the gentle “Beware the Silent Waters” and “I’d Give it All,” she easily proves her versatility. She also gels quite well with the aforementioned guests, providing further evidence of her being a bigger player in the near future.

Furyborn is simply enjoyable from start to finish. Heavy riffs, melodic choruses, and a balance of the aggressive and quiet – the variety and songwriting chops help to insure that there’s no lack of memorable moments to be had. Easily recommendable for those looking for something on the melodic end of the metal spectrum.