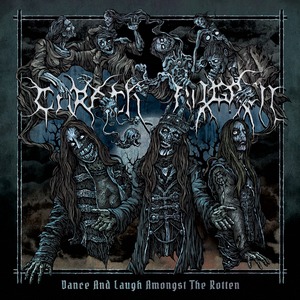 Poised for years as the successors to the throne of symphonic black metal, Carach Angren have continued to press forward, further into the theatrical with each release. It seemed to really come to a head on the previous album, This is No Fairytale, with the prevalent use of spoken word segments to further craft a story. As expected, Laugh and Dance continues the band’s progression into the theatrical…but at what cost?

Let’s talk about what works. The orchestrations are incredibly strong and work to build an immersive atmosphere to this conceptually-based tale (a girl playing with a Ouija board). It’s eerie, sometimes unsettling, and when it’s used in combination with some of the heavier moments (see “The Possession Process”) it can really create quite the wow factor. The lyrics themselves also help to further the story, and are an integral part of the entire presentation…even if they can be a bit hokey. Plus, there’s less spoken word elements this time around too, something that often derailed this album’s predecessor.

Unfortunately, there’s some things that don’t work quite so well. The riffing may pack a wallop every now and then, but one would be hard pressed to really recall too many standout moments. Instead, as the band becomes more theatrical, they rely more upon the keys leading the way, engulfing much of the landscape into riffing that is simply “there.” When the band slows down, it really starts to lack energy and can border on tedium (“Charles Francis Coghlan”), and other tracks like “Song for the Dead” seem to linger far beyond their effectiveness. The band is going for the over-the-top factor, and for what it’s worth, they are going all-in. But between spoken-word or dark rasps that come up, they tend to drain the energy out of the music.

Laugh and Dance Amongst the Rotten feels like a mixed bag. On the one hand, some of the orchestrations are the best the band has accomplished to date. But the riffing just doesn’t seem to stick. The orchestra and guitars need to strike a delicate balance to be most successful, and this one just dips too far in one direction.