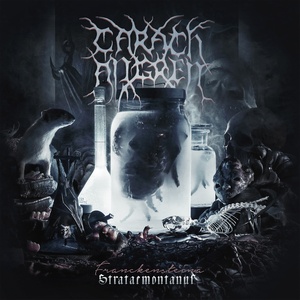 Your thoughts on Carach Angren and what they have done with their last few releases probably puts you on one side of the fence or the other. They have really upped their symphonic elements and dove headfirst into more legitimate storytelling. Thus the theatrical part of the band has increased, and to this scribes ears, caused the band to lose a bit of its metallic core.

Again, the symphonic element of the band can’t be understated. They’ve done a great job at strengthening their theatrical and orchestral sound and Franckensteina Strataemontanus again raises the bar for the band. It’s sweeping and wholly atmospheric, to the point where you could really think about it in terms of the background of a play or movie. But therein also lies the rub. Increasingly so, the band’s ‘metallic’ portions have suffered a bit at the hands of this change in sound. This scribe is hard-pressed to identify one riff that really took hold over the course of multiple listens. While some atmospheric black metal bands can get away with this due to the induced mood of the music (often gloomy or morose), here the synths are bombastic and powerful – shouldn’t the riffing still be at that same level to match the orchestrations? At this point, it doesn’t feel like too much of a stretch to see the band drop the guitars entirely in the future. If the blasting drums are still present, would it really impact the music all that much? In the context of a track like “Sewn for Solitude,” one could make the case for it. The blasting drums are there, but most of the guitarwork seems to offer just some heaviness and fills a role.

While some will be enamored by the powerful orchestrations that Carach Angren currently employ, others will continue to be disappointed by the diminished role of the guitars in the grand scheme of things. Franckensteina Strataemontanus has the grand feeling of a soundtrack, but as the description implies, it often feels akin to mere background music. Add in that this feels much like their last album, and there’s likely to be disappointment abounding.