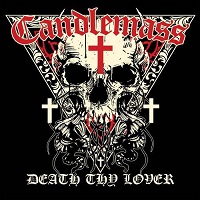 Swedish singer Mats Leven is criminally overlooked. Under-appreciated and unsung, too. He’s done time with Yngwie, and manned the lead male vocal position in Therion when they were at their obvious peak. However, he’s never been fully entrenched as the singer of a big band until he got the nod to replace Robert Lowe in Candlemass in 2012. At the time, main dude/songwriter/bassist Leif Edling had announced the band would stop releasing new material, preferring to focus on festival appearances and their masterful back catalog. Obviously, that has changed, with the four-song Death Thy Lover setting the Swedes on a new course.

Leven, as you would surmise, is a sure bet on these tunes. Like Lowe, he’s the master of the gravel-throated histrionics, and since there’s no comparable to the monk-robed one himself, Messiah Marcolin, the manner in which Leven (and Lowe before him) handles the C-Mass tunes is less on a theatrical level, and more on the ground. Therefore, his vocal tactics on the EP’s title track or “Sinister and Sweet” give Candlemass something they haven’t had in a long time – a fresh angle, along with a vocalist with uncapped range.

As the undisputed best epic doom metal band of all time, Candlemass need not tinker with their sound. And to the credit, they haven’t done much of any of that upon their 2005 return. But, the addition of Leven is sure to pique interest in a new studio jaunt from a band who probably doesn’t need to do anything else, but probably should considering who’s fronting the band now. Death Thy Lover is quite the nice start for the Leven era of the band.