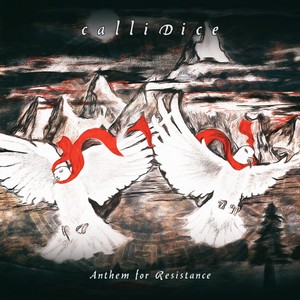 Callidice happen to fall in an interesting position. While their music is something that could be tucked into the modern melodic death metal grouping, they don’t do it in the same way that their peers do. As the band’s first full-length album (following only 2 earlier EPs), Anthem for Resistance has some promise the band could easily tap into for their next works.

So what makes Callidice special if they seem to nestle into a defined category? For one, the use of synths and electronic elements in their music can push them into bombastic points at times (“Colors of My Life”), but at others it’s more nuanced and futuristic in tone (“Brotherhood of Bastards”). It sets a groundwork that you aren’t going to be hearing 8 variations on the same theme as you move through it. The riffs and melodies walk the fine line of maintaining heaviness while providing memorable hooks, as Callidice certainly falls at the heavier end of the genre in that sense. You also aren’t going to hear a ton of clean vocals either (“Scarred” contains some solid ones), which keeps the emphasis on the melodies to do the heavy lifting. The energetic stylings of the band’s material allows for quite a combination, with attacking riffs often setting up a catchy melody or synth to take things a step further, such as with “Refined by Fire.”

Anthem for Resistance brings in plenty of melody to soak in without watering it down with a formulaic and predictable approach. The material consistently works to draw in the listener without having to go too far outside the box in terms of their formatting, and stretch their sound into something that should have plenty of appeal for both melodic and death metal fans. Anticipation weighs as to how they will further expand upon what they’ve done here in the future.