Blind Guardian – Memories of a Time to Come (Virgin/EMI) 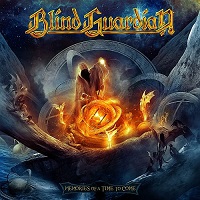 Long overdue for a “best-of” collection, Blind Guardian were more than likely in a dilly of a pickle trying to select songs

for Memories of a Time To Come. Had they succumbed to the desires of their fanbase, then the entire compilation would stretch across their 1990 to 1998 glory days, but you can’t find fault with BG for being all-inclusive…their latter-day era does have some merit too. Nevertheless, Memories is a 2-CD compilation of the band’s most well-known songs, some of which received a fresh mix job, while others were re-recorded altogether. Say what you want about the Guardians of the Blind, but they do things their own way, and it usually works.

As noted, a new mix job brings out some more power in generational cuts like “Imaginations From the Other Side,” “Somewhere Far Beyond,” and “The Last Candle.” Not sure why they went with “The Last Candle” over “Welcome to Dying” or “Goodbye My Friend,” but we’re getting nitpicky here. Probably the only other song

Not surprisingly, 2002’s A Night at the Opera is largely ignored, with “And Then There Was Silence” making the cut, albeit in re-recorded form. Recent jams like “Sacred Worlds,” “This Will Never End,” and “Ride Into Obsession” provide a limited degree of balance, so it won’t be hard to picture listeners jumping to “The Bard’s Song” duo, and adventurous “Mirror Mirror.” And of course, no Blind Guardian compilation (or live show, for that matter) is complete without “Nightfall,” which sounds as rousing as ever. Eat your heart out, Queen.

A deluxe edition third disc features the band’s classic Lucifer’s Heritage demos and cult favorites “Run for the Night,” “Tommyknockers,” “Time What Is Time” and world-beater “A Script For My Requiem” among others. Yet, it’s the selections on the first two discs that helped established the Guardians as Europe’s #1 power metal band, a throne they’ve yet to vacate. To that point, most power metal warlocks, wizards, and gnomes are well-versed in BG’s catalog, so Memories is best-suited for those in search of new adventures and stories, that once latched onto, will never leave you.