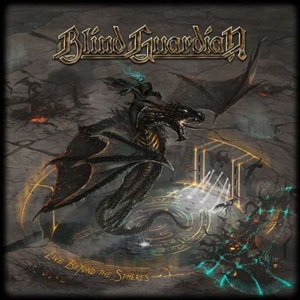 During the 1990’s, this scribe remembers many European (and North America) metal bands who couldn’t get arrested securing record contracts stateside. In fact, Blind Guardian had a major deal with Virgin for their fourth album Somewhere Far Beyond – but never received any distribution here until nearly a decade later. My, how the times have changed. Properly revered and sustaining headline status (they made two separate trips for the latest studio album Beyond the Red Mirror), the band felt so strong regarding their performances they choose to issue a triple-CD document of the early European run of shows in support of their tenth studio record. Not an easy task to pour through numerous shows, considering an average Blind Guardian gig goes over two hours, and often switching up set lists/song favorites depending on the territories they play – but the fruits of their labor should appease most BG followers.

You’ll get epics like “The Ninth Wave”, “Wheel Of Time”, plus “And Then There Was Silence”. The crowd pleasers “Nightfall” and “Valhalla” that encourage unison chorus supplementation. The slower forays with “A Past and Future Secret” plus “The Bard’s Song” that give the band a chance to develop their folk/acoustic dynamics while still appeasing the hordes in brief tenderness. An occasional rare airing or two as well – this scribe psyched to hear “The Last Candle” and the debut album’s opening cut “Majesty” to remind the listeners of the band’s heads down power / speed metal roots. 22 songs in all, with Hansi’s soft-spoken between song demeanor (English or German, depending on the track chosen) a twist beyond his normal bard-like, commander of the legions voice that may often be imitated but cannot be duplicated. Because of the complexity and density of the band’s studio records, it’s obvious that many cuts receive a leaner arrangement tact on stage – but that doesn’t weaken the impact, the audience supplementing activities while the Olbrich/Siepen axe duo unleashes their rhythms and leads like the best power men in the business.

Establishing a precedence and continually writing new albums for over 30 years should be applauded – especially in a power metal landscape that often pigeonholes and suffocates bands who dare rock the boat (such as the Queen-like vocalization emphasis heard on A Night At the Opera). Blind Guardian prove with Live Beyond the Spheres why they are one of the best bands at what they do – championing the legends of the Hobbit and Tolkien’s world before it was cool or hip.