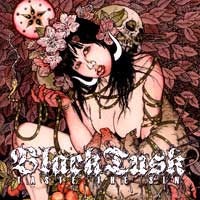 We’ve now hit the point where anything or anyone associated with Mastodon is supposed to be good, exalted, praised, etc. Well, that’s not how it works, as a lot of the bands in line with Mastodon’s amplified-to-the-hilt, irreverent prog boogie are a cheap imitation. Rank Black Tusk as one of those bands. Taste the Sin borrows heavily from just about every band under the Southern doom banner (they’re from Georgia, go figure), resulting in an album that fails to resonate.

Sure, there’s the occasional catchy riff going down, most notably on opener “Embrace the Madness” and “Unleash the Wrath,” but Black Tusk’s ideas and riffs are so formulaic and threadbare that nothing sticks. Most of the song selections here range from generic (“Way of Horse and Bow”) to derivative of Kylesa (“Unleash the Wrath”) and just plain pedestrian (“Takeoff” and “The Ride”). As straightforward and no-frills as Taste the Sin is, that is ultimately is what derails this 11-song platter from doing anything of note. Once you troddle through the first four or five songs, you’ve seen and heard it all, which means you’ve heard every riff that pre-Leviation Mastodon ever had.